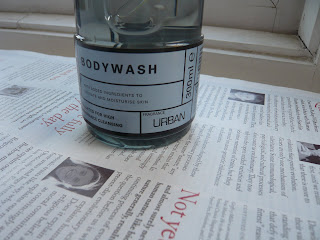 Is this the first time in history that "Fragrance: Urban" is seen as a positive thing? 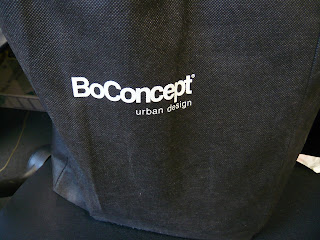 And the expensive Danish modern furniture shop Boconcept has taken to asserting its urban-ness. It's something that I've been noticing more and more. Take Nespresso, for instance, the cartridge-based coffee system from Nestle. (Link will start music playing; mute speakers.) It could be argued that Nespresso is fairly strongly attached to the city, as it's hard to imagine its capsules being retailed outside major conurbations. (You can order them online, though.) Nevertheless, this year it launched Citiz (again, music), a Nespresso unit intended to be specifically urban.

I wrote about Citiz for Icon 071 (May 2009). The design, by Antoine Cahen, is interesting enough. What's most interesting are the identifying "urban" features: it has a small footprint for small kitchens, its name is spelled in a way that suggests collapsing educational infrastructure graffiti tagging, its colour pallette is "urban", and its profile intentionally resembles a skyscraper. This similarity in profile is heavily pushed home by the unbelievably slick animated introduction to the ">Citiz website, which is really worth watching. Skyscraper, maybe, but with that rounded top and gleaming metal it's Beaux Arts, Deco or 1980s Pomo - a Chrysler or Singer building, or the old Barclays building on Lombard Street - nothing with unfriendly Miesian corners. Nespresso hired semioticians to consult on the Citiz; they pushed "humanising" features, making the controls more like a face. It's truly strange how things end up looking the way they look.

I'm straying, however, from the main thread of this post, which is the use of the word "urban" in a marketing context. Over the past 10 or 15 years, it has been presented as an indicator of the success of urban renewal that city centres have again become desirable places to live and that Thatcherite slur "inner-city" has lost its sting, replaced with some of the marketing I've shown above. Urban became young and hip - urban was marketable. Have a look at the website of Urban Living, an estate agency that claims to have been among the first to recognise emerging demand for "dwelling in the city". White-painted and modern! Central! Urban!

When we're told a thing is something, we're also being told that that thing is not something, and therein often lies the fib. Look at the use of words like "natural" in the context of ads for things like shampoo and food - it invites the mind to think "not artificial, not processed, not unhealthy". And therein lies the fib - so-called "natural" products are often all those things.

So when we're told something is "urban", what is it not? Rural, yes, but more importantly it is not suburban, and it is not the world of small towns and dormitories. "Urban" is not those things - it makes a broad claim to a certain level of vibrancy, cultural activity and hipness. The marketing usefulness of the word "urban" works both ways - estate agents like the one linked above, regenerative property developers such as (obviously) Urban Splash, and the government's own regeneration initiatives trumpet urban-ness.

It's a tendency that seems deeply rooted in anxiety about the places these organisations are involved in building and selling. As Jonathan Meades says in the wonderful On The Brandwagon, these places are very often central, but not urban. They're modern suburbs, exurbs even, with limited community or cultural activity, but situated in the urban core. They're insulated bubbles of dormtown deadliness dangerously injected into the bloodstream of the city. The connections, interdependency and social capital that have defined city life are absent, perhaps even purposefully minimised. Regeneration, Meades concludes, means no rioting within the ring road.

And inside the riotless entryphone zones, we have rootlessly mobile "young, hip, urban" professionals listlessly buying FCUK bodywash, Boconcept sofas, and Nespresso Citiz coffee machines in an effort to reassure themselves, yes, this is the city, we're urban, we really are. Like fresh, like natural, it's a vast marketing fib.
Posted by Unknown at 08:00