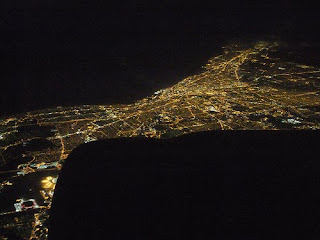 "Night Flight", taken from AMD5150's Flickr stream and used under a Creative Commons licence.
My recent post about Jonathan Littell's book The Kindly Ones was long enough, and yet I still don't feel that I quite did justice to the Stalingrad sequence. The chapter stays on my mind, particularly its unrelenting opening. The Kindly Ones is full of powerful, regularly horrific and surreal, imagery – a lengthy blog post could be written about its treatment of underground (excuse me, U-bahn) stations, but it would be spoiler-heavy – so what was it that made Maximilien Aue's flight into Stalingrad so haunting? This post won't return to The Kindly Ones in depth. What I want to do instead is tie together the Stalingrad sequence with a number of other scenes from books and films, and with any luck compose some general conclusions about technology, civilisation, infrastructure, power and what might be called islands or pockets.

So what follows is a kind of chain of connected phenomena.

1. In my previous post, I talked about the encirclement of the German armies at Stalingrad as a sick technological joke. What kept the “kessel” alive for the brief time it held out was not resupply from the air – which never even approached adequacy – but the promise of resupply from the air, specifically Goering's vain boast that the Luftwaffe was up to the job, pending eventual relief on the ground. The hope is that normal service will shortly be resumed. And when Aue arrives we're treated to a picture of 1940s high-tech in a state of advanced stress: the airfield, surrounded by wreckage, under constant bombardment, the Wehrmacht radio trucks clustered together, aerials maintaining an electronic link with the outside world, the HQ in snow-covered rail cars. These details are unusually memorable and moving, and I think that the reason is their precarity. These technological sinews keeping the kessel alive are extremely precarious and vulnerable. 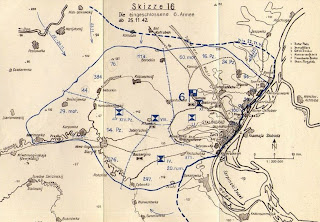 Sketch of the "Kessel", the pocket of surrounded German troops at Stalingrad.

But the situation in the kessel is also evocative because the place is a world in its own - a microstate struggling to keep alive, with its own self-contained hierarchies and infrastructure, albeit starving and in a state of terminal collapse. 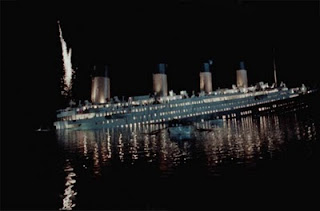 2. In James Cameron's film Titanic (discussed recently over on Fantastic Journal), some of the most moving shots are when we see the crippled ship from a distance, surrounded by dark, empty, freezing ocean. It is an ember on a sheet of black ice. As it sinks, there's a moment when we see the desperate situation in the electricity generating plant - men frantically throwing circuit breakers amid total chaos as the rising water consumes and shorts the ship's electrics. They are trying, in the face of inevitable failure, to keep the lights on. We have not hitherto seen the ship's power plant, and of course we don't see it again. Up until that moment, the lights are just background - they're a given, implicit, or as Peter Sloterdijk would say, they are latent. Then we see the desperate men in the power plant, and they suddenly become explicit - we see the precarity of the ship's lights. And then the lights go out. The ember goes dark.

Again, here, the ship is microcosmic, a high-tech product of Edwardian civilisation, and a self-contained world. Its sinking can be seen as a period when the denizen of that microcosmos attempt to keep it running – power, lights, class system – in ever-harsher conditions, until the moment of disappearance.

3. In High Rise, JG Ballard presents us with a giant tower block that is designed as a self-contained city for its residents, complete with shops, banks, swimming pools, schools, health clubs and so on. (Le Corbusier aimed in this direction with the Unite d'Habitation, and to connect it with the previous item, it 's worth remembering that he was drawing on the design of Edwardian ocean-going liners.) Following the logic of their building, the tower's residents reject the outside world and set about pursuing arcane tribal wars. As conditions in the tower deteriorate, the power fails on many floors - patterns of blackness across the facade of the building, and flickering lights, are recurrent motifs in the book. The air-handling, garbage and water infrastructures also decline, or are weaponised by one floor against another. The habitable pockets inside the building break apart and shrink. At the end of the book, it becomes clear that the disintegration that swept through the tower has started in another building in the same complex - its lights are going out.

Of course, the news that visitors were stranded on the 124th floor of the Burj Khalifa recently by a lift breakdown brought this story to mind. 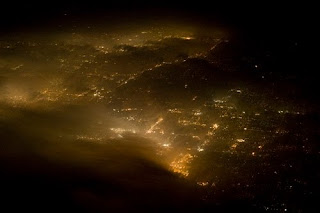 "City Afire", taken from BWJones' Flickr stream and used under a Creative Commons licence.
4. The George Romero film Land of the Dead isn't great, but it has its good points. In it, civilisation has been wiped out by a zombie apocalypse, but some survivors have managed to form a basic society in the middle of the city of Pittsburgh, protected on three sides by rivers and on the fourth by an electric fence. And there's a fortress within this fortress, a gated community housing the elite. Again, a precarious island of light in an ocean of dangerous darkness. Of course Romero's earlier Dawn(s) of the Dead have a similar premise, with survivors holed up in a shopping mall - a perverse island of consumerism, with power and light, surrounded by savagery. In the 2004 remake of Dawn, this isolation is driven home by the survivors' communication (by whiteboard) with a man trapped in a nearby gun store. He's only a street away, but might as well be on the moon.

5. The remade Battlestar Galactica exemplifies the sort of mood I'm talking about. Battlestar concerns a ragged fleet of ships housing the few tens of thousands of people left alive after a devastating attack by the robot Cylons. From the very first moment, everything in the fleet is on the brink of running out - water, power, fuel, ammo, fighter ships, pilots. Scarcity is a more pressing menace than the pursuing Cylons, and much of the drama in the series comes from the fleet's internal political difficulties as it implements rationing and a kind of war-socialism while attempting to keep up internal democracy. It is fabulously claustrophobic and tense - at times it's Das Boot with spaceships.

6. In the new Stephen King novel Under the Dome - which I haven't read - a community in New England is cut off from the outside world by a myterious dome, and swiftly reverts to barbarism. The plot is strangely similar to the fate of Springfield in The Simpsons Movie; indeed, Springfield's steady decline is one of the stranger things about that film, being uncharacteristically dark for The Simpsons - a haggard Kent Brockman informs the populace of rolling blackouts. (Similarly, I sometimes find myself idly wondering what would happen if my apartment building, or the train carriage I'm in, were suddenly cut off from civilisation. This - on the scale of an apartment building and a single house respectively - is what happens in the films REC and Right At Your Door, but they don't quite fit into this post. Will Self has written entertainingly about this, in an essay in which he imagines that he is trapped in the Eden Project on a day trip by an ecological catastrophe and he and his fellow day-trippers have to organise a feudal society - a lottery-funded Battlestar Galactica.) (Actually, there's another Stephen King datapoint: The novella The Mist, in which New England townsfolk are trapped in a supermarket by a dense fog containing horrible creatures. The generator that is providing the supermarket's electricity become highly important.)

7. I recently flew over the Isle of Man at night. The whole island was visible from the plane window, towns and roads lit up. That whole place could be powered by a single generating station, I thought, a closed system - but a precarious one. Then I considered my only situation, in a plane thousands of feet up, warm and comfy but only foot away from the screaming breathless nothing. Precarious.

So what does all this amount to? I've long had an interest in end-of-the-world dramas and tales of besieged cities; I think what it might amount to is an interest in seeing technological civilisation under stress, or to see technological civilisation pared back to the barest possible minimum. This kind of situation exposes the workings of the machine, the sinews holding it together; the "threads" that gave Mick Jackson's nuclear war drama its name. Seeing a microcosmic part working (or failing to work) exposes the workings and the vulnerabilities of the whole. It also exposes those "givens" or "latencies" at work in our society: we expect the lights to stay on, we expect water to come out of the taps, we expect there to be food in the shops - we expect these things so totally that we don't even think about them.
Posted by Unknown at 00:01

One other data point that popped into my head while reading this was Nancy Kress' The Kindness of Strangers, which Escape Pod did a presentation of last year.

great post. ♥ flickering light trope. going to try Ballard High Rise and Stephen King Dome books back to back over the summer. though i might not be much fun to be with, post-apocalyptically. :0