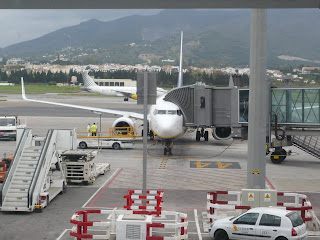 Image from my Flickr stream.
Filed under "I really shouldn't read the Standard, still it's right there on the seat next to me and sometimes Kieran's in it BLOODY HELL SO ANGRY":

The new owner of Gatwick today dropped London from its name and pledged to wipe out all links with its BAA past.
[...]
The name will be written in the form of an italicised “signature” rather than in the uncompromising “Rail Alphabet” Helvetica font used by BAA since the Sixties.

Mr Wingate said: “We have done the logo in the form of a signature because we want the airport to feel very personal and that we absolutely care about passengers having a good time going through the airport.”

The new owner, investment fund Global Infrastructure Partners, unveiled a new look that it claims will “rekindle the original spirit of taking a flight — we want to make people enjoy it.” Much of the change is cosmetic but aimed at finally ridding Gatwick of its state-owned Seventies heritage.

The point of Helvetica is that it is neutral. It is extremely legible. It is not subject to cultural bias, regional variation, and the vicissitudes of fashion and corporate identity. It is designed, painstakingly designed, to create standardised signage. Standardisation might not be exactly sexy but it is extremely useful if you want to avoid the world being a confusing racket. "Uncompromising", damn right it is. It is also international, part of the global language of airports, flight, travel - exactly the kind of spirit that this cloth-eared rebranding exercise apparently wants to tap into.

Sure, it's only the logo, there's no indication that they're going to sweep away the whole glorious sign system developed by William Pereira and others. But that crack about "ridding Gatwick of its state-owned Seventies heritage" shows the dangerous prejudices in play. The spangly, gaudy, deliberately confusing world of the British Corporate Pleasure Environment yawns wide, an aesthetic scraped out of the more alarming malls and bars. Let a thousand defective touchscreens blossom. I had a disheartening experience while travelling through Heathrow Terminal 4 last month - wanting to check if my gate had been called, I the back of a cluster of flatscreens attached to a pillar. Thinking "Aha, flight information", I walked around to see the screens - and they were all ads. They were all ads on the next pillar as well. I had to hunt for info. The departure board is to the airport user what the altar is to the cathedral congregant. The boards should be magnificient, huge, dramatic centrepieces of the lounge, and reproduced on a smaller level everywhere in every side chapel, shop and cafe. That list of names! The world awaits! It's beautiful as well as useful. But I had to hunt. and you can see the same dreary though processes at work - "what this place needs is to be much less like an airport, and much more like Westfield".

The plans, they say, hearken back to the golden age of plane travel. I've been thinking and reading about that golden age recently, partly in connection with my article about the Boeing 747 in the July Icon. This golden age certainly existed - it ended when air passengers chose inexpensive mass transit over luxury boutique travel. That is a choice worth remembering. But one of the characteristics of golden age was service, something that I do not feel will be well served by scrapping check-in desks and replacing them with touchscreens. It might be very efficient - I've had mixed experiences with self-checkin - but it's not exactly personal.

"We want to make people enjoy it" - that note of coercion is a little worrying. And this emphasis on pleasure is equally unsettling. It's the Corporate Pleasure Environment again, endlessly pestering you to relax and chill out and treat yourself and so on, forever reminding you of what a great time you're having and see how it's just like Sex and the City until all you want is to be left alone. Want to make people happy, Gatwick? You can't. Want to help people enjoy the airport? Minimal queuing. Clear signage. Information accurate and prominent. Clean. Efficient circulation. Plentiful seating that you don't have to pay for by buying a coffee. Your italicised logo isn't going to make the tiniest jot of difference to anyone.
Posted by Unknown at 12:00

As someone who uses Gatport on a weekly basis, I can confirm that in fact the *only* pleasure comes from seeking out the remnants of that "state-owned Seventies heritage."

Underneath the Subway franchises and privatised train operating companies jungle of signage and slot-machine ticket dispensers, the train station foyer retains it Yorke, Rosenberg and Mardall tradenark white-tiling, like a little sister to the Euston Station ticketing hall.