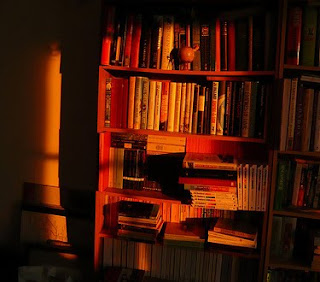 A tatty former bookcase, now long gone, replaced by a wall of IKEA conformity. From my Flickr stream.

Earlier today I read, and enjoyed, Stewart Lee’s column on the pleasures and pains of compulsive media collecting. I am something of a hoarder myself; I won’t go into figures because it’s just so much dick-waving and because Lee certainly has more than me. Suffice to say that I pick up a couple of new or second-hand books pretty much every week and rarely throw anything out. Even taking a Tesco bag full of rubbishy Mission Earth and Harry Turtledove books down to the charity shop is freighted with sorrow. Then there are the box files of clippings and ephemera. I wouldn’t say this is “collecting” because that suggests aims, parameters, a sort of directionality, but it is a dedicated amassing of stuff. What is this behaviour? An immature attitude to mortality? Almost certainly. But while we’re scrabbling together crumbs on this dirtball, permit me to scratch an itch.

Now, when the subject of bookshelves comes up in discussion online, bookshelves filled with books, there are two recurring counter-positions. These positions directly contradict each other, so just putting them next to each other goes some way to refuting them.

“Aye, you may have a lot of books, but I bet you haven’t read all of them!”

“What’s the point of keeping a load of books you’ve already read?”

Having erected my pair of strawmen, I will now knock them down. In some quarters it is clearly considered pretension to display books that you haven’t read. This of course makes no sense. It shows a misunderstanding of why people would want bookshelves at all – showing off is just a fortunate secondary effect. The great pleasure of owning bookshelves half-filled with unread books is that you can always find something new to read. Having finished a book, I can immediately move on to another. There is no realistic prospect (thank god) of running out of new things to read. This is the heart of having a home library, however small: pleasure on tap.

Moving on to phantom composite internet moron remark number two, “what’s the point of keeping a load of books you’ve already read?” Well, there is of course the reference value – being able to look something up, to find a source or a quote or something. And there’s the pleasure to be had from re-reading. One of the Great Prophets of my personal cosmology is Jerry Seinfeld, but on this point we disagree. He (or at least the long-running-NBC-sitcom version of him) was never a big reader, and was certainly not a re-reader. In one episode he mocks George Costanza for wanting to retrieve some books from an ex-girlfriend’s house: “When you read Moby Dick the second time, Ahab and the whale become good friends!” This position suggests that the only pleasure to be had from reading is the revelation of plot, which is of course nonsense. Plot is of course an incentive to keep reading, but the real pleasure comes from language and character. Even plot twists can be savoured more than once – the first time might have a monopoly on the thrill of realisation, of having your view of the story transformed, but subsequent readings can revisit that thrill as memory, and offer the pleasure of examining the workings of the twist, like admiring a piece of craftsmanship or inspecting a puzzle box to see how it works.

More profoundly, both of these positions stem from a misunderstanding of how reading works. They see books as being binary objects – something is either read, or it is not read. This isn’t true (and not simply because you can read half-way through something and then stop). Pierre Bayard’s excellent book How to Talk About Books You Haven’t Read explains this beautifully. Bayard’s book is often misunderstood (mostly by people who haven’t read it, but also by many of its reviewers) as a bluffer’s guide, a manual for literary bullshitting. It isn’t. Instead, he talks about the imperfect nature of reading – even when we read a book thoroughly, it’s impossible to acquire a full mental picture of it, our view of it is inevitably going to be imperfect in some way. Rather than a binary state of books that are “read” and “unread”, all reading is a sliding scale of unreading – books we haven’t read but know something about, books we have read in part, books we have read and forgotten, and so on. Bayard aims to break down a taboo: to give some value to unreading by revealing that all reading is unreading.

Reading isn’t really an act of consumption at all – it’s not like ticking off a checklist or working through a bag of crisps. Both of the positions I mention in this post treat reading as a kind of scorecard, but really it’s more of a continuum. To read is to constantly build and furnish a mental environment, with (for me at least) no particular great aim in mind. So it’s hardly surprising that the continuum of reading can manifest as a physical environment. Books are a landscape to be occupied and enjoyed, not a set of individual states to be reached.
Posted by Unknown at 05:10

Labels: books, literature, me me me, print

Enjoyable reading - thanks for sharing

Can you conceive of a day when bookshelves are no more and all books are digitally stored, retrieved and displayed for consumption?

How would this change your relationship with books vis. your points outlined above.

David, although e-books may soon be more popular than physical books, I think the total replacement of the physical book is exceptionally unlikely - it will carry on as a design item, an aesthetic object, a haptic treat, a status symbol. The very sensual pleasure of browsing shelves (as opposed to scrolling or searching, a textureless experience) is a considerable aid to the continued production of books.

Almost all of my books are packed into boxes in rented storage on the outskirts of San Francisco. For the last year I've felt as if part of me is missing- an important part of my brain perhaps. I can't count the number of times I've wanted to go back and re-read something or look something up in a trusted old book I've had for years, only to go to our one lonely bookshelf and find the Argos catalogue staring back at me.

Another interesting read - thanks Will.

I second the argument to keep books purely for the pleasure of going back to them at some point in the future. It's worth overflowing your home with Penguin paperbacks for that singular moment when something jogs your memory and takes you back to a certain line - or phrase, or poem - and fills you with pleasure all over again.

I think the only question (one often raised by my girlfriend) is how to reconcile living in central London - and the limits on living space that entails - with the desire to keep every book you've ever bought? My only argument to date is that I can always find room to fit one more somewhere on the shelves...

With that in mind, how's 'Care of Wooden Floors' coming along?

Well, I do discard books - reluctantly, as I say in the post, but it does still happen. I've been steadily culling since we moved, sending dozens of pulp paperbacks to charity and giving away quite a few. But space is a constant headache, and we have literal heaps that need dealing with somehow. As DINKYs we have for the time being a spare bedroom/"study", which helps.

Care of Wooden Floors is inching towards the 3rd draft; the 3rd draft will be the "definitive" one, at which point it will be taken from my hands and pimped around town. However it's always hard to find time for it.

The CAPTCHA word on this comment was "unread". Eerie.