This was written for Edge magazine's "Time Extend" slot, which looks at the lasting influence of a classic computer game. It first appeared in Edge 215 (June 2010) and is reproduced here with permission. It expresses some of the thoughts contained in this old blog post in a more cogent and convincing way. 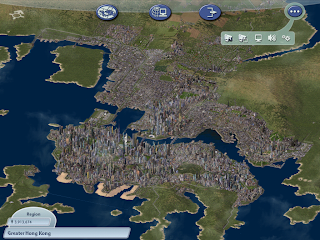 Eagles soar in smokeless skies and whales glide through the clean oceans. Herds of horses (or perhaps giraffes) are the only inhabitants of the lush plains and old-growth forests. The simulated world of SimCity 4 is a peaceful place before you set about building your city. Boring, though. What it needs is urban sprawl, ribbon development along blacktop highways, strip malls and Dopplering sirens, chimneys belching soot, budget crises and strikes. What it needs, really, is problems – problems that you, the mayor, can solve.

That’s the paradox at the heart of the appeal of SimCity 4. Much of the fun that comes from playing the 2003 apogee of the SimCity series of city design and management games is solving problems: relieving traffic on this avenue, removing the polluting industries from that business centre, restoring a depressed neighbourhood to prosperity. But these problems have to come from somewhere. Next to the game’s peaceful, constructive, problem-solving side, it also nurtures the darker, more complex pleasure that comes from problem-creation. The tension between these two sides of its personality is written deep into SimCity 4; as we’ll see, it’s a reflection of the real-life systems and people that led to the creation of the game in the first place.

Key to SimCity 4’s enduring popularity is the fact that it can be enjoyed on a number of levels. Effective management can be satisfying in itself, given the game’s devilish complexity compared to previous versions and its dozens of competing variables. When things are going well it can be pleasant enough to simply sit back and watch the contented populace streaming along your ample boulevards while skyscrapers sprout around them – again, something that reached its peak with the gorgeous, hugely detailed, entirely 3D-modelled graphics of SC4. But those are passive pleasures, to be enjoyed once a city has been built. First you must play the game – and its split personality means two different styles of play. You can plan ahead and build with care, tending to your city like a bonsai tree, guiding every stage of growth and clipping and tweaking until it looks just right. This approach is deeply absorbing and can eat up tens of hours of dedicated play; the quality of the graphics has always made a beautiful city a highly desirable end. But that can be a bit boring. Often, a player will just want their city to get big quickly. So indulge in SimCity 4’s kinky secret: the joy of unplanned sprawl. The city is developed hurriedly, with only the loosest plan in mind. Vast zones are laid out without much thought, in artless but easy-to-build grids, and with services added (maybe) as an afterthought. Obviously, this manner of play creates problems – but in SC4, that’s a good thing. Pretty soon, your city is a snarling deathmaze of smog, crime, poverty, dereliction and gridlock. Bliss. These problems must be fixed to keep Gotham growing, but they can be ‘fixed’ in the same haphazard way that the city was thrown up in the first place: quickly, cheaply and dirtily. Roads and train tracks can be punched through run-down inner cities without protest; new business districts can be founded on the outskirts without caring too much about the chaos this will ultimately cause on the roads. Each solution brings a batch of fresh problems.

This approach, with its swift returns and constant challenges, can be the most rewarding and most addictive way to play. Imagine that you lay out a residential district and it immediately develops into Snooty Corners, a rich neighbourhood full of attractive high-wealth houses and well-kept lawns. That part of the game map is pretty much done with – barring vandalism, there’s nothing more you need do to it, so it’s finished, dead, game over. But if it develops into Crystal-Methington, a crime-ridden hellhole full of empty lots and burned-out cars, well, game on, you’ll be revisiting there pretty soon. The appeal of creating a ‘perfect’ city may be what draws players to the game in the first place, but actually perfecting a city is a losing approach. When it’s done – admittedly after what could be tens of hours of play – what else is there to do? You can look at it, but that’s more like owning a fish tank than playing a game. Almost every game is a struggle towards completion and perfection: SimCity gives you the opportunity to reject that goal, and to revel indefinitely in play. Its creator, Will Wright, called it more toy than game. It’s a rare game that can be at its most fun when it’s played ‘badly’.

The reckless style of play can also, oddly, lead to the best results. Cities built as sprawls, full of improvised solutions and gimcrack workarounds, can be very attractive – certainly Maxis put as much aesthetic effort into the low-wealth commercial units and tenement blocks as it did into the pretty-pretty mansions and sparkling skyscrapers. But they’re also appealing, and fun to play, because they most closely resemble real cities. And it’s worth remembering that this high-speed slapdash improvisation is how most real cities grew, and are still growing.

Plus there’s a sheer atavistic thrill that comes from playing the game fast and loose, with all sorts of destruction and little thought of consequences. Your urgently needed relief road happens to pass straight through a small, comfortable middleclass neighbourhood? Pah, build it anyway. Sure, you could spend the money on a neat little bus system, but isn’t a glistening motorway just a bit more swanky? Similarly, a vast stadium complex is always going to be more appealing to the ambitious mayor in a hurry, even though a well-funded local library network could yield better results for a fraction of the cost. Huge engineering projects will always be more fun to put together, and more impressive onscreen, than microscopic local initiatives. A mayor should be building suspension bridges and airports – leave the rest to Extreme Makeover: Home Edition.

There are plenty of real-world examples of civic leaders’ weakness for expensive, grandiose white elephants. But one particular figure stands out: Robert Moses. Moses, an American planner and administrator, came closer to playing SimCity with a real city than anyone else in the free world. Never once holding elected office, he wielded unsurpassed power over the city of New York through mastery of its bureaucratic machinery, diabolical legal chicanery and an eerie knack for raising vast sums of money. Mayors, governors and even presidents were forced to let him have his way. He first used this power to build colossal parks and recreation beaches, making himself wildly popular, but his attention soon turned to highways. When Moses started his career in the 1920s, New York was just beginning to come to terms with automobile traffic. He shaped the way it responded, girdling the city in an elaborate web of freeways and neglecting public transport. These new superhighways often created as many problems as they solved, rapidly choking with cars. They drove suburban sprawl and were built with little regard for the residents who happened to be in the way. More than once, Moses demolished a thriving community to make way for a road, even though a perfectly good alternative route existed. When Moses was finally ousted in the 1960s, the city had an expensive freeway network, but was more jammed with traffic than ever. It was also teetering towards bankruptcy.

Moses did a lot, but he didn’t do his worst. He wanted to slice freeways right across Manhattan itself, through some of the most expensive and crowded urban land in the world. One of these plans, the Lower Manhattan Expressway, was only defeated after a desperate struggle by a small community group led by a writer called Jane Jacobs. In the course of the campaign Jacobs wrote a book, the Death And Life Of American Cities, which defended the dense, mixed neighbourhoods that Moses dismissed as slums and encouraged a view of the city as a complex organism which needed nurturing, not drastic surgery.

Death And Life became a classic, and is still widely read. Among those who were influenced by it was Wright. He built his city sim to resemble a living thing, with scores of interlinked processes and cycles interacting over time in a complex system that the player can adjust and mould – a vision palpably drawn from Jacobs’ work, and cultivated over time into the superbly complex and organic fourth game. Ultimately, then, Robert Moses could be seen as the wicked uncle of SimCity 4, indirectly inspiring it by causing Jacobs to mount her defence of city life. To enshrine Jacobs in a game, Moses had to go in there too – we can share his satisfaction in grand projects and wanton destruction. He’s the dark side of the Force, one half of the duality that makes SimCity 4 so seductive. Planning versus sprawl; micromanagement versus megaprojects; neighbourhoods and localism versus traffic, money and power. Those opposite poles keep the dynamo of SimCity spinning even after seven years; it is still rich and rewarding because it springs from the vital conflicts in our own world.
Posted by Unknown at 05:15