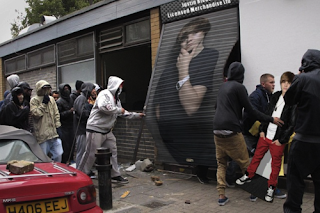 The post-8/11 city hoves into view; it galvanises, if you will, its metal carapace dull in the late summer sunshine. In response to the riots of last week (only last week?), the government's "chief planner" has asked councils to consider easing planning regulations for metal shop shutters. Pause for a moment to reflect on what British "planning", a term that used to entail a degree of thinking ahead, has been reduced to: a measure so reactive it serves as an update to the old saying "shutting the stable door after the horse has bolted".

Reactive and, it seems to me, futile. One of the most arresting images of the looting that accompanied the riots was of metal shutters being yanked off shopfronts by dedicated teams of youths*, a sort of "unboxing ceremony" for those perhaps unable to derive regular doses of fulfilment from consumer technology. Of course shopkeepers have a right to not have their goods stolen, but this alteration does nothing to reduce the risk of future riots. It is little more than security theatre - allowing shopkeepers to make a feel-good purchase that will help them sleep a little easier without doing much to aid them in the event of resumed rioting.

For the neoliberals in government, it must be ideologically appealing to respond to the riots with an act of deregulation, however minor. For the rest of us, it is significant that this intervention takes place in the space between the things that are for sale and the people who want to buy or steal those things. This space is called the street - it should have other functions as well, but one of the most depressing aspects of the recent unrest was how it rammed (ramraided?) home the fact that consuming is increasingly the only thing that can be done in a street, even during a riot. This domination by commerce, and the dwindling of public space that goes with it, must be seen as one of the key causes of the riots.

Anyway, here come the shutters. My hunch is that this alteration to the rules will have most impact outside the great cities, in small towns and villages where the mob looms large only via the Mail and the Express. In most of central London, the night-time streetscape is already heavily metallised, so it's hard to see what difference will be made in those areas that actually experienced riots. The shutters are such an established aspect of East London's streets that they have prompted their own subgenre of street art. The king of the shutter artists is Ben Eine, whose giant colourful capital letters adorn scores of after-hours shopfronts in Shoreditch and Bethnal Green. They're very likeable, bright and pleasant, undeniably an improvement on unadorned (or rather tag-spattered) steel, but also deeply safe. Their jolly colours and the Smarties-cap collectability of the letters give them an infantile edge; there's something sedative about them, the aestheticisation of a hardened landscape, a harbinger of hipsterisation.

Eine's shopfront graffiti is so safe, in fact, it comes with a government endorsement - a Conservative government endorsement, no less. A year ago David Cameron presented President Obama with one of Eine's paintings as a gift. The name of the painting, spelled out in those cheery vintage shuttercaps, was "Twentyfirst Century City". The steel shutter thus emerges as the perfect symbol of the Cameronian cityscape, open for business and closed for everything else. Even then, the symbol must be carefully tuned; we wouldn't want to be too edgy. "Twentyfirst Century City" was the most appropriate text Eine could find in his studio at short notice - rejected paintings included "Monsters" and "Delinquents", which would have sent quite the wrong message.

Update: I completely missed this post with some views on shutters, which has some interesting points of view on the subject, particularly in the comments. Via Sam Jacob's Twitter feed.

* Precisely the sort of coordinated effort that has in recent days been condemned as "mindless".
Posted by Unknown at 03:59