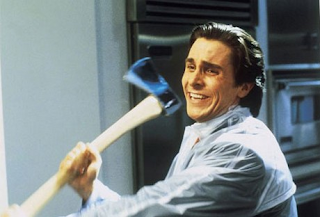 The Hatchet Job of the Year award is a new prize intended for "the author of the angriest, funniest, most trenchant book review of the past twelve months". Why reward bad reviews? The organisers point to declining newspaper readership and the declining influence of newspaper book reviewers. The prize, they say, will help promote reviews that both informative and entertaining.

Hatchet Job of the Year is a crusade against dullness, deference and lazy thinking. It rewards critics who have the courage to overturn received opinion, and who do so with style. Most of all, it is a public celebration of that most underpaid and undervalued* form of journalism: the book review.

John Sutherland glosses some of the issues around the prize in the Guardian - This is a field where I am simultaneously poacher, gamekeeper and restaurant patron with a taste for wild rabbit. In my day job I commission and write reviews, including many book reviews. I am also days away from publishing my first novel, and about to get my first reviews. (I hope. Even bad reviews would be better than no reviews.) And I love to read reviews - including bad reviews, which might even have the entertainment edge**.

Although the fledgling novelist in me doesn't might have some qualms about encouraging reviewers to be negative, overall the HJOTY strikes me as a good thing. The more prizes for criticism and critical writing the better. Even if reviewers are so emboldened they start dealing out stinkers to the undeserving, that might not be a wholly bad thing. I think an unfairly harsh review prompts more debate than an unfairly positive review, and the more debate and talk around books the better.

Where I think it has gone wrong is the name. "Hatchet job" suggests ... well, it suggests what it says, someone running at a target flailing an axe without finesse, a Patrick Bateman onslaught of murder; brutal, total, gleeful, arbitrary, unkind to the surrounding furnishings. A good bad review is a lot more precise than that. It's more like a gangland execution: impersonal, precise, neat. An icepick to the back of the head, no splatter, no witnesses. The victim is no less dead but the affair is rather more civil. And I'm pleased to note that the stiletto is more evident than the machete in the shortlisted reviews. Adam Mars Jones, Leo Robson and Mary Beard all aim for the weak points, the fatal flaws, and an economy of strikes bring down the mark. Jenni Russell and Geoff Dyer have the more-in-sorrow-than-in-anger demeanour of professionals. Only Camilla Long really seems to have got busy with the axe and the woodchipper.

So what to call the award, if hatchet is too blunt? Stiletto was my first thought, but that's better suited to crime writing, or erotica. Better to go with Icepick of the Year, because then we could call them the pickies, which has a delightful second thread of meaning.

* An aside. Undervalued, really? My early journalistic background was in the trade press. The better professional magazines regularly expose serious wrongdoing and incompetence in their sectors only to have their best stories lifted, often without attribution, by the broadsheets. I'm sure journalists on local papers might feel similarly. I would dearly love book reviews to have a greatly enhanced cultural status - for instance daily pages in the paper, which theatre & live music somehow get in the Guardian. But book reviews have a cachet that other valuable journalistic fields do not. A lot of people want to review books - I know, I commission a review section, and I get emails from them. I've written a few emails to commissioning editors myself. Dogged technical and trade journalism has far less lustre. I'm sure it didn't even occur to the drafters of the Hatchet manifesto.

** Especially in Fortean Times, I find - maybe it's to do with the often lousy quality of the esoterica it reviews, but when it dishes out a bad review, it really goes for it. They rate everything out of 10, and my eyes always go to the 1, 2 and 3/10 reviews first.
Posted by Unknown at 05:10