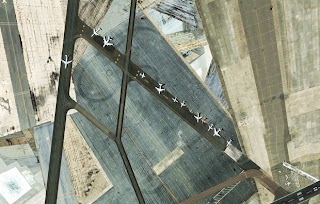 Issues 075 and 076 of Icon have now been archived online, plucking a handful of pieces by me from the obscurity of print and into the bright lights of the internet. There's an interesting little news story about Francois Roche's biopunk house-meets-bacteria farm, "I'm Lost in Paris". Another news story covers David Kendall's "Always Let the Road Decide", a photographic project following migrant labourers as they travel on foot along and around Dubai's superhighways. And I wrote a short introduction for a gallery of Hubert Blanz's amazing X-Plantation images.

Looking back, Kendall and Blanz's images have a lot in common - they both reveal an edgeless nightmare wasteland only safely crossed by machines. 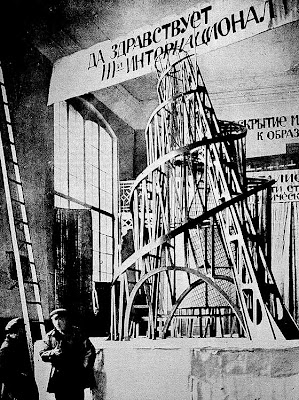 Vladimir Tatlin and his tower. (Not actual size.)

Also: my article on Tatlin's Tower for the Icon of the Month slot. Proposed in 1919 but never built, the Monument to the Third International still casts quite a shadow across architecture, just as this Kosmograd post makes clear. It's a fascinating structure and an interesting story, so enjoy.

Also: reviews of the V&A's Telling Tales exhibition, the film Chevolution and China Mieville's The City and the City, all of which I've mentioned on this site before.
Posted by Unknown at 03:48