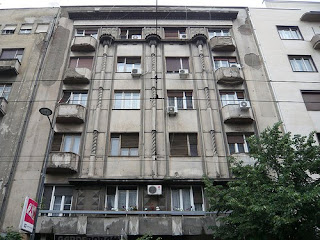 Care of Wooden Floors is set in an apartment in an inter-war moderne block in an unnamed central-European city. During the writing of the book, I made a number of sketch plans of the apartment, the block and the surrounding streets as aids to memory or to work through specific narrative problems. Later, as I discussed the design of the book with Clare Smith, my editor at HarperPress, the idea arose that we could use one of these floor plans as an endpaper for the book in hardback.

I was enthusiastic. When I was a child, I had a weakness for fantasy novels - and gravitated towards those that had a map at the front. Tolkien must have started this tendency with his beautiful maps of Middle Earth in The Hobbit and the Lord of the Rings trilogy. A map at the front of a fantasy book worked as a kind of blurb, a promise of the adventures to come - you just knew that the mountain-ringed forbidden city or the skull-shaped island fortress jutting from a wreck-garnished sea was going to crop up somewhere. It would be a hell of a tease if they didn't. Moreover, the map is part of the escapist promise of fantasy: that you are entering a fully realised world, one that extends beyond the bounds of the story, and that even if the stinging deserts and haunted swamps are barely alluded to, they they can exist more fully in your own imaginative rendering of the world. Nowadays, my map fix comes primarily for nonfiction books of history - Amanda Foreman's A World on Fire, which I'm steadily gnawing my way through at the moment, has a fine selection throughout its 900 pages. The only work of non-fantasy literary fiction I can think of with a map at the front is Toby Litt's Deadkidsongs, although I think there must be others.

Care of Wooden Floors isn't a fantasy, but I liked the idea of a map as a tribute to those happy memories of childhood reading - and also as an expression of the rational interior-design ambitions of Oskar, the flat's owner. But I asked to re-draw the master sketch map for inclusion, to iron out some small inconsistencies in it here an there and to ensure that it was the most accurate possible rendition of the flat.

Almost immediately, I ran into problems. I already knew that the master floorplan didn't match up with my mental picture of the flat, and the way it was described in the book. That was why I wanted to redraw it. But attempts to iron out the difficulties simply created new problems. In effect, I could not draw a floorplan of the flat - it was an impossibility.

This doesn't mean that there's a mistake in the book, or that an impossible or impractical configuration of rooms is described. Although the flat is, over the course of 300 pages, described in some detail, it's not empirically described. The book isn't a blueprint. I didn't give measurements, proportions and orientations of every aspect of the building. A reader could sketch an entirely reasonable floorplan of the flat without having to resort to extra dimensions or folds in spacetime. But I'm fairly sure it wouldn't match up with mine.

What I was dealing with is three different versions of the same flat:

Version 2 is based on version 1; version 3 is based on version 2. It made most sense to base a floorplan on version 2, to avoid "error". But when I looked at the result, a prominent detail failed to match my mental picture of Oskar's home. This detail is irrelevant to the plot or to anyone's understanding of the book; and it isn't described in the book, it is simply the result of reconciling two aspects of layout that might otherwise conflict. But it troubled me to commit to graph paper something that was "untrue". Fixing it threatened to raise more problems than it solved.

We decided not to include a floorplan. My own reservations were only part of this decision - it was also considered too dry a note to open on, and potentially distracting to a reader. I would much rather a reader builds up their own image of the flat from the words, rather than being guided down to exact details by a plan. But the episode has caused me to realise the protean nature of what I've written. Which is the "true" flat? All three versions are, in their way, but I have to confront the fact that my mental picture of the flat is now the least important of those versions, and the reader's version is the most important.

Thinking on about maps in fiction, I remembered (from reading Martin Amis' criticism, I think) that Nabokov drew maps of great books to illustrate his lectures on English literature. Here's Nabokov's map of Stephen and Bloom's routes around Dublin in Joyce's Ulysses: 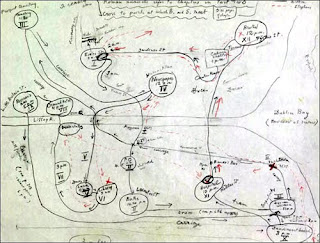 Nabokov recommended that instructors draw up diagrams the setting of books to wring the maximum amount of sensual detail from them, as a route to fuller understanding of the author's intentions. It's only what is described that matters; writing is in part a matter of choosing what to describe and what not to describe. A detail that existed in my conception, but which is not described at all, cannot be said to matter at all. To suggest it in a floorplan when it doesn't exist in the text would sprain the imaginative sinews that any reader spins around the descriptive bones the author provides. That would hardly be fair or desirable.

(The hunt for Nabokov's Dublin map led me to this rather wonderful project, a detailed, annotated Google map of Dublin overlaid with a historic map.)
Posted by Unknown at 01:23

I remember going to my Dad's office to photocopy the maps in all my fantasy books. As I read (and reread) through them, I would trace the routes of the heroes, attempt to draw the cities, and sometimes even create new continents for the fantasy world. Those maps truly did allow me to enter into the worlds they charted.

The same can be said for maps of cities and urban plans in fantasy. I'm currently rereading Robert Jordan's Wheel of Time series and was surprised to see that there are several city plans throughout the text. Rather than discourage me from building my own metal image, I find that these plans actually strengthen my image of the cities. Like the maps, they provide just enough information to help me solidify the nebulous impression of place without defining it completely.

But I agree with you that these useful evocations and allusions to an imaginary world break down at the scale of the floorplan. I think you made the right decision. All too often, words fail in their attempt to describe architecture. Not only are architects generally terrible writers, architectural criticism tends to rely too much on perfect, overproduced photographs or overwrought analysis. In my own work, I'm currently experimenting with integrating fictional narratives with real architectural criticism. I'm interested in the notion that we can come to know a place through someone's experience of it rather than a straightforward image or description. Using only text to evoke a true sense of place in the mind of the reader --not only what it looks like, but what it feels like-- is a difficult task, but it's a challenge worth undertaking. If you're successful at it, I think the reader will feel more invested in the story. They'll have projected some part of themselves into their image of the apartment.

I very much look forward to Care of Wooden Floors.

Looking forward to reading your book.

The Amplewick of Toby Litt's deadkidsongs is a barely disguised Ampthill in Bedfordshire, where Litt grew up (as did I). It's quite weird seeing a map and reading a story set in a fictitious town based so clearly on the town where I grew up.

So I think you did the right thing in not trying to forcefeed the appearance and layout of the flat into the readers heads, to avoid the disconnect between the reader's imagination and the authority of the map/plan.

Of course, when the film version of your book is made, there'll be another version for readers to grapple with.

Great post, look forward to the book. First non-fantasy book with a map that springs to mind is The Name of the Rose .

Jimmy, thanks for the fascinating comment. I remember sketching out my own fantasy maps as well - at the time I probably imagined it was preparation for writing my own epic fantasy stories (which I certainly attempted) but more often I'm sure the sketching of the map scratched the world-creation itch without me going to all the trouble of actually writing anything. The map was there as the ramework for any number of plots, without committing one to paper.

Kosmograd: I remember being charmed by the inclusion of the map in Deadkidsongs, but I don't remember referring to it or needing it at all. Film adaptations can be such a problem to the imagination - I remember being very frustrated with the film of Bonfire of the Vanities. Wolfe describes all the interiors in great detail and so I felt my mental picture of the book was particularly well furnished. Then the film goes and differs. I certainly feel very pleased to be laving out the plan, let other people conjure the space for themselves.

Meg, thanks for the comment. The Name of the Rose is a good one. I remembered after writing the post that Ellis Peters' Cadfael books, medieval detective fiction, have maps of 13th-century Shrewsbury at the front. I think that's probably true of other works of historical fiction.