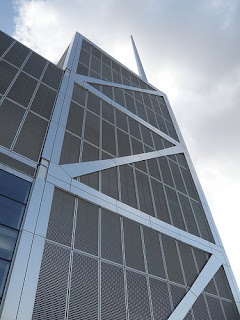 I've been up to my neck in "proper writing" and neglecting the blog lately. So this is one of those somewhat unsatisfying "read me elsewhere" posts - made extra unsatisfying by the fact that a lot of this stuff isn't online.

One thing that is online is this review of a small show in Eindhoven called "The New Psychedelica". The show really scratches an itch for those of us who feel that art hasn't really plumbed to depths of weirdness offered by the digital world.

Also online is this review of Locals Only, a photographic record of California's 1970s skate culture, at men's style website Jock & Nerds.

The new issue of Icon has a long piece by me mulling what London's new crop of skyscrapers means for the city, in the company of sculptor, polymath and expert Londoner Richard Wentworth. There's also a much shorter piece by me about David Chipperfield's Hepworth Wakefield.

Print-only (for the time being) but free is The Clerkenwell Post, an attractive zine about all things Clerkenwell. It was produced by Icon's publisher and launched at Clerkenwell Design Week. If you're in the area copies can still be found - there's a piece in there by me about the Barbican.

Next week there will (I hope) be some news about the Secret Project which has been eating up a lot of my time behind the scenes.

And I will be doing more blogging soon.
Posted by Unknown at 05:29

Labels: care of wooden floors, index, London, me me me, my writing