The Infrastructure of Civility

Last year I was asked to write an essay for Artangel on 1395 Days Without Red, paired films by Sejla Kameric and Anri Sala (which it funded). Sadly the piece never went live due to timetabling issues and I forgot about it until now. So here it is. 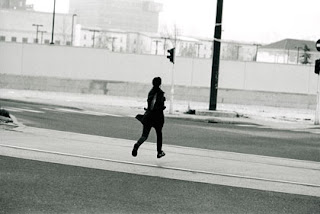 A group of people gathers on a street corner. They all face the same direction. Is this a queue? Not a word is spoken but clearly there is an understanding between them. All observe an invisible line on the pavement, not advancing so much as a toe beyond it. They are waiting to cross the street. The scene is at once familiar and disturbing; the street is quiet, the shared stance is too formal, too precise, and the group's seriousness, its watchfulness, puts the observer on edge. It is as if they fear the sunlight streaming down the street – they keep to the shadow. This patient group brings to mind the dusk-time photographs of Gregory Crewdson, in which everything is completely normal and thoroughly, horribly, wrong.

How do we know something is wrong? We are picking up on the information the group radiates about its situation. This is no special talent: we do it every day on the street, especially if we live in a large city. The more we see of this particular group, the more it unsettles. When an individual breaks from the group to cross, their separation from the others is in itself troubling – as a whole, they are so still. More troubling is that they cross at a run, or as close to a run as they can manage, as many of them are elderly. When they arrive at the far corner, gasping for breath, they resume their walk at normal pace. The city is Sarajevo, still haunted by the memory of its 1395-day siege during the 1992-1996 Bosnian War. Streets in the centre, certain vistas and angles, were covered by snipers. An act as mundane as crossing the street while picking up supplies became a tangle with death.

In Sejla Kameric and Anri Sala's twin films 1395 Days Without Red. a memorial of those times, there are no guns, barely a shot, no signs of danger. All we see is the behaviour of the citizens of Sarajevo, and the deadly games they were forced to play as part of their routine. The danger they are in is communicated entirely by their reaction to it – their trepidation, the agonising dash, the sobbing breaths after. These clues do more than enough to fill in the rest of the picture: the sniper at the window, his field of vision, the nearest safe point, the distance between.

Every day we read the signs around us, we understand our fellow citizens. When we see a group of people looking up, we look up. A group of people gathered silently on a pavement, visibly not progressing beyond a certain point, would make any of us pause and at least consider the reason. We are reading the city: it is a mixture of unseeing and seeing. On the bus, the behaviour of one passenger causes them to suddenly stand out – they are agitated, restless, they have not engaged the invisibility cloak that makes them appear like anyone else, that allows us to disregard them after a microsecond of consideration, an appraisal we are not even aware of making. Other calculations follow: are they drunk? Possibly violent? Just having a bad day? We can read the demeanour of the young man who is seen doubled over by effort, fighting for breath – we know the next run will be a big one, and sure enough the view stretches out to encompass a vast, deserted intersection, a shadeless desert. We knew it before we saw it, by observing a fellow citizen.

In Sarah Kane's harrowing 1995 play Blasted – inspired by and written during the conflict in Bosnia – a soldier demands a cigarette from the man whose hotel room he has just abruptly entered. Why, asks the man. “'Cause I've got a gun and you haven't,” says the soldier. And he gets his cigarette. Violence, or the possibility of violence, has imposed a new social calculus on the interaction. He has the gun so he gets what he wants. And so it is in Sarajevo. Our shared, instinctive urban behaviour – the way we minimise hassle to each other, the essential codes that make densely populated city life possible – aggregates into rituals, unspoken rules, an unwritten code. Disruption to these rituals causes angst: we know to keep walking when we pass through the ticket barriers on the Tube, clearing the path for others, and it's frustrating when a group of tourists fails to do this. Violence dissolves these codes, and imposes its own. Our basic expectation that we will not be killed by a bullet while walking down the street no longer applies. The faded white lines of the pedestrian crossings in 1395 Days Without Red could be the ruins of an impossibly refined civilisation, so remote is the safety they promise. The title refers to the necessity, during the siege, of avoiding brightly coloured clothes – a new law imposed by the madness that had taken the city. But it could equally refer to an absence of stop lights – years without the basic infrastructure of civility that cities need to operate.

But the city is not all civility. The possibility of a violent end while innocently going out to buy bread naturally fills us with horror – but this combination of mundanity and terror is not entirely out of place in any street. The social codes that manage our behaviour in the city, that smooth paths and prevent squabbles, are not the absence of violence – they have grown from the underlying possibility of violence. In Europe cities have been the venue for both civilisation at its most exquisite and for savagery at its basest. Kameric's film opens with a philharmonic orchestra performing in a modernist cultural space, intercut with tumbled graves in a public park. When not running for her life, the films' protagonist (played by Isabel Meridu) hums the orchestra's tune. A city, for all its affirmative gathering of human life and enterprise, often also hosts crime and mayhem. It is always a place of death as well as life. We coexist with all these aspects. For some this coexistence is closer to the surface than it should be, and 1395 Days reminds us of the hum of violence in all cities. As we follow Meridu, we are sometimes directly behind her, seeing the back of her head, sometimes watching her neutral but serious face from the front, other times watching her pass from a fixed vantage point – perhaps the view of the young skinhead in the park, whose sunken eyes are locked on a distant point, whose field of vision is stained red by nearby lights. (Perhaps he is a gunman; very possibly he's just an innocent, but the logic of the siege has obliged us to consider the possibility.) There is an inescapable voyeuristic about the way the camera follows Meridu, especially when we are fixed on the back of her neck. Combined with the suspension of safety indicated by the desperate dashes across intersections, the implicit threat in the air is sexualised. We never see where she is looking, what she is seeing, but we can feel something of how she feels; a desire not to be seen.
Posted by Unknown at 04:30 No comments:

Where to find me in May

In the actual
I'll be taking part in a great event at Waterstones Piccadilly, London, on 16 May. It's four for the price of one: four of the Waterstones 11 all reading from our books, talking, answering questions, all that interacting with people stuff. The lineup is myself, Patrick Flanery ("Absolution"), Anna Raverat ("Signs of Life") and Rachel Joyce ("The Unlikely Pilgrimage of Harold Fry"). That's also three Desmond Elliott prize longlistees in one place, for anyone keeping score. We will be "talking about their inspirations and their journeys from unpublished writer to literary success!", according to the listing. Tickets £5/£3, start time 6.30pm, more details 020 7851 2400. 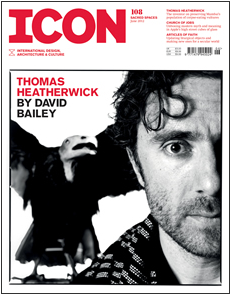 In print - nonfiction
"The Towers of the Dead" is my contribution to Icon #108 (June 2012). It's a long interview with British Designer Thomas Heatherwick on what is perhaps his most ambitious and unusual project yet: an immense aviary enclosing the Parsi "towers of silence" in Mumbai. Central to the Parsi faith is the practice of "sky burial", in which the dead are left at the top of stone towers to be consumed by vultures. But modernity is threatening the practice, and with it the survival of a religion that is more ancient than Christianity. Not the usual brief for an architect, and Heatherwick's proposed response is far from the usual work of architecture, so please do be sure to pick up Icon while it's out. The rest of the issue, themed "Sacred Spaces" is great, too: Sam Jacob on Apple Stores, Edwin Heathcote on why architects love to design churches, Riya Patel on new ritual objects for a secular age, Owen Hatherley on Pyongyang, and much else.

Be sure to pick up Volume #31, "Guilty Landscapes" - it's an edition of the architecture magazine co-produced with the Unknown Fields Division, and thus includes contributions from a load of UFD collaborators, including me. My contribution is a long essay, "Zones of Anxiety", mostly about the Baikonur Cosmodrome as surreal militarised environment. I haven't seen any of the other features but from the contents page it looks like an amazing lineup: Kate Davies and Liam Young (of course), lots of other Unknown Fielders, Volume stalwarts Brendan Cormier and Arjen Oosterman, photographers like Chris Jordan, John Gollings, Edward Burtynsky and Bas Princen, filmmaker Michael Madsen (who knows where the bodies are buried), poet Mario Petrucci (of "Heavy Water: A Film for Chernobyl" fame) and just tonnes more.

If anyone's asking themselves "whatever happened to Toxic Tourism?", this Volume essay is a sizeable appetiser.

Edited to add: I mentioned this in a previous round-up but I was jumping the gun a bit as it only recently came out - "Pocket Utopias", an essay of mine about the design of insane asylums in the 19th century and their influence on the rise of the suburb, is in Architectural Review Asia Pacific #124. It's a big and beautiful redesign issue, so well worth picking up while it's available. (There's a digital edition if you can't find a copy.)

In print - fiction
That's right, new fiction. Two short stories, although British readers might find them slightly out of the way.

I'm in "Man-Made Lands" a special "chapbook" accompanying the Spring/Summer 2012 edition of Ninth Letter, the literary magazine produced by the graduate creative writing programme and school of art & design at the University of Illinois, Urbana-Champaign. Edited by Scott Geiger, "Man-Made Lands" intersects literature and architectural space. Looking at future literatures that could be generated from real places, I imagine "Selections From The Foyles Cache", a book composed of all the fragments of emails, network updates and (of course) unpublished novels produced on laptops in the coffee shop at Foyles on Charing Cross Road.

And another. The third edition of Swedish fashion culture magazine Vestoj is themed "Fashion and Shame", and includes a short story by me called "Mirror" - a brief riff on paparazzi practices and the head-coverings used by defendants on their way into court hearings.

That's all for this month.
Posted by Unknown at 04:35 No comments: