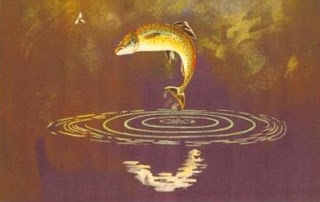 Over at the Bi Blog, there's a new and quite short piece by me on the theme of "Pool". I talk - briefly - about what George Orwell thought of London's suburbs. The (rather lovely) concept of the Bi Blog is that two writers riff in different directions on the same subject; my opposite number, Erandi de Silva, writes on Sunset Boulevard and reflecting pools.
Posted by Unknown at 14:07 No comments:

High-speed Panopticon and the Thames Valley State of Mind 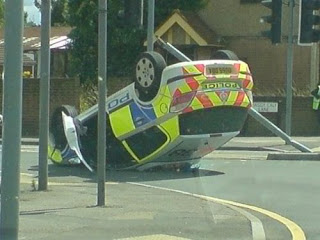 Image from the Flickr stream of edwbaker and used under a Creative Commons Licence.

Road Wars, a cheapo Sky-made reality television show which follows British police patrols, is objectionable on a number of levels. It's relentlessly bombastic and sensationalist, from the titles to the thundering incidental music and the breathless, slang-heavy commentary. It's unashamed in this pursuit of sensation, interspersing the fly-on-the-plod reality stuff with "the best" (that is, the most exciting and entertaining) clips of police "in action" from around the world. It's essentially nuance-free, presenting a completely Hobbesian view of Britain in which a thin blue line of dedicated, calm professionals is the only thing standing between Decent Citizens and a feral, raging, incoherent, bloodthirsty underclass that commits crime for little more reason than sheer love of mayhem. It gives a pretty clear picture of what all British television would be like if the country succumbs to fascism.

And yet all these unassailable objections don't stop it being tremendous atavistic fun. High-speed pursuits, filmed by helicopters and from the dashboards of pursuing vehicles are naturally compelling and frankly I'm a sucker for them. It can't all be Rothko and Satie, dammit, a man needs candy. Before Road Wars, it was Police, Camera, Action that I found compulsive. There's something about the genre "just look at this maniac!!"

That appeal to the lizard brain aside, there's something else at work. From the speeding time-stamped panopticon of the police vehicle fleet, the landscape changes. "It heaved and merged like porridge," said EM Forster of the the countryside seen from the window of a train. "Presently it congealed. They had arrived." The landscape in Road Wars performs a similarly hypnotic, continuous transformation, but a century on from Howard's End we have a far less clear boundary between town and country. Road Wars mostly unfolds along trunk roads, a context-free exurban blur of detached houses, shopping centres and grass verges planted with scrawny saplings. This is where it is at its most natural - when a fleeing car takes a turn towards an urban centre or residential district (a "built-up area" in the pervasive jargon), somewhere with a bit of character and activity beyond the constant flow of vehicles, the reaction of the commentator is of course horror and the alarmist voiceover cranks up a notch, promising near-certain blood and chaos unless the police are able to do something, anything. There are good reasons to be fearful of a car chase through a city centre but in the landscape of permanent pursuit, the landscape of Road Wars, what resolves is a place where the pursuit can be tolerated and a place it cannot. Southern Britain refocuses as a place of flow interspersed with islands of stasis and danger.

For me, this connects with the familiar parcel of Britain that the rozzers are laying rubber over. Although it will clearly show any bit of suitably adrenalised official video, Road Wars focuses of the activites of the Thames Valley Police's "roads policing proactive unit" (Newspeak abounds). I grew up in Oxford, part of the TVP's sprawling beat, a rare British example of a city with proper banlieue. The centre was safe for the middle classes - the less fortunate were hutched in estates on the outskirts, around a ring road that was conveniently racetrack-like. These estates rioted and developed a national reputation for joyriding in the early 1990s, which might go some way to explain why the Thames Valley plod is the heavily tooled-up force that appears in Road Wars.

Not that the blackened peripherique had the slightest impact on us in the centre; it might have been on another planet. Central Oxford was well suited to cycling. When I reached driving age, I had no need to learn, and never took lessons. But for friends of mine in more isolated places like Old Marston and Whytham, the driving licence was a necessity - they learned right away. As soon as they did, my sense of living in a city weakened perceptibly. Piling in a car at the weekends, we could go bowling in Aylesbury, or go to the waterslides at the Oasis centre in Swindon. Southern England suddenly felt curiously Californian, or what a Oxfordshire teenager's perception of California might be. For about a year it was a boundaryless autopia, a free zone of leisure and consumption, a kind of paradise. (Then I went to university.) Road Wars suggests this endless Californian Thames Valley of A-roads and motorways, out-of-town leisure parks and grass verges, where the discrete towns and cities melted into a more general, more modern state of mind. Localism? Give me unlocalism. Adulthood seemed to arrive the day I no longer felt confined by place.
Posted by Unknown at 12:00 2 comments: