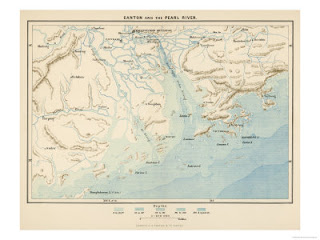 Why you? Why write to you? It's the name, I think. In this country, I'm afraid to say, most people won't have heard of you. Even if they use the mobile phone network or pharmacy chain you own here, they will mostly believe they are customers of companies called 3 or Superdrug, not a corporation called Hutchison Whampoa. But that name, it works a kind of magic – it did for me, anyway. I can't remember when or where I first heard it, but I've always remembered it. Hutchison Whampoa. It's the perfect name for a corporation. There's the Hutchison. That's a name you can trust. Solid, Anglo-Saxon, Familiar. And then there's the Whampoa. Whampoa! What a beautiful word. Faraway, even exotic, but with confident, declarative edge. I assumed it was a person, the business partner to Mr Hutchison – that's a great strength of your name, it suggests an alliance between east and west, global scope, a Eurasian colossus. However Wikipedia tells me it's the archaic English transliteration of Huangpu, the dock area of the city of Guangzhou, a gateway for European trade to China from the 18th Century. All the better. That transnational, cyberpunky edge is given a romantic historical anchor.

Yes, Wikipedia – sorry about that. As I say, you're an enigma, Hutchison Whampoa. I knew your name, but that doesn't reveal anything about what you do. That's the other great strength of the name – it's abstract, it doesn't point the mind in any particular direction, you could be be doing anything anywhere. Everywhere, in fact. That mobile phone company you own – you don't own the phones themselves. You own an infrastructure or transmitting masts, but even that's not the most important part of the business – you own a section of electromagnetic spectrum, a slice of bandwidth, a portion of the air itself. The masts are just a way of modulating your ethereal empire, making it accessible, packaging morsels of it for sale. Owning part of the air – that's ubiquity, that's proper corporate reach. And you own a chain of cut-price perfume shops, too: owning the air, the technology to broadcast across it and the means to scent it. That's comprehensive service.

Maybe you should buy a kite factory, and cover that atmospheric niche too. Maybe you already own one – is there anything you don't do? You say you have five core businesses – I like that, core businesses, one day you must tell me about all your less important flesh and pith businesses. Five core businesses, then. There's ports and related services – nice to see you're still keeping your hand in. And there's retail; telecoms; property and hotels; and my favourite, energy, infrastructure, investments and others. Are you sure that last one is just one business, because it sounds like at least three. “And others.” So modest, Hutchison Whampoa.

I hope you're not sensitive about your size – you're a $42 billion dollar corporation, have a bit of confidence. Don't infer any criticism. I like the polymathic generosity of your endeavours. It feels properly corporate – the sum of many efforts. Forgive my intrusion. Can you forgive? I am sure you can forget. Corporations are good at forgetting, and unseeing, and not being seen, and moving on. You are not your holdings. You own, you operate, you merge and demerge. It's tempting to think of you as the apex of a pyramid, but you're less substantial and more far-reaching than that. You are a grand transaction, one that has been in process for centuries, a current, a trade wind. Even surrounded by you, we don't see you. I thought you might like to be noticed, Hutchison Whampoa, this once.

Labels: me me me, my writing, writing 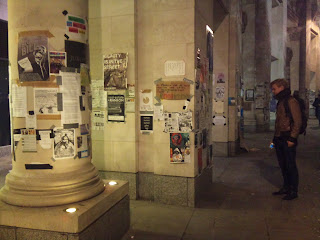 Photo by me. This post sat in drafts for ages, which is why it's a bit behind the times.

When Paternoster Row, adjacent to St Paul's Cathedral in the city of London, was destroyed by fire during the Blitz, 6 million books were consumed by the flames. For centuries, the area was the centre of London's bookselling and publishing trades - before Fleet Street, before the Charing Cross Road, before Bloomsbury. Robinson Crusoe was published there [1]. Its destruction was the terminus of that part of the site's history; the area was rebuilt as Paternoster Square, which was first a modernist office complex, and since the 1990s has been a deadly historicist Carolingian showpiece. It is home to the London Stock Exchange, now targeted by our local representatives of the Occupy movement. Unable to camp in the square outside the stock exchange - this so-called public space is privately owned, and was promptly sealed off by the police - the Occupiers have set up in St Paul's churchyard, prompting a continuing crisis at the cathedral and much public debate, which I won't recap here.

The one incursion the Occupiers have been able to make into the Paternoster complex is to stick posters and other ephemera on the pillars of its external colonnade - as shown in the photo above. I have fairly mixed feelings about the occupiers[2], so took the opportunity one evening a week or two ago to go down to the site and look around for myself. I found an orderly, friendly and essentially unobstructive protest. But I was most charmed by the informal poster-pillars, which immediately reminded me of the area's publishing history - nearby, the Occupiers have also set up a "library", and those book-covered tables seemed another connection to that past.

Recently I was at the Architectural Association, attending Thrilling Wonder Stories 3, a conference of speculation. There, Kevin Slavin gave a fascinting talking about the rise of "algo-trading" - the use of algorithms to trade stocks. You can't just buy or sell a million shares of something without undesirable market effects, so algorithms are used to break up that one big trade into many small, seemingly random trades. More algorithms are used to try and detect those programmes. So much trading on stock exchanges is now automated, and that in turn is changing where trading occurs. Microseconds can make the difference between profit and loss, so the banks of computers running these automated trades are increasingly locating themselves around switch hubs, the "telephone exchanges" of the internet. This reduces the lightspeed travel time of their commands to the market - and also moves them away from traditional financial districts. Increasing auomation, and the migration of this automation, means fewer and fewer actual people working on Wall Street and in the City - and thus Slavin compares the Occupiers to hermit crabs, taking over an abandoned shell after its previous inhabitant moved on.

What I think is most striking about the Occupation is the reoccupation of public space in the city with visible ideas. Of course the powers that preside over the City have ideas, they have an ideology. But it serves their purposes to not really advertise those ideas, so that we almost forget that they have ideology at all, and believe that they are mere innocents, "entrepreneurs" frolicking wealth-creatively in a benign state of nature, a fragile state at that, one which must not be disturbed for fear that they might just take off like deer. The City is a very strange place indeed, and has been for decades. For most Londoners, the ones who don't work there, it's just a kind of lacuna, mostly only regarded from a distance. And the City I think favours this semi-visible status, which is why it has happily driven other uses (such as the publishing industry) from its bounds, and would like to do unto Smithfield as it did unto Spitalfields. Its penetration by visible dissent isn't threatening to it as an obstruction or as a way of stopping its work - the Occupation really doesn't obstruct anything significant. The threat is connected to the possibility that is might have to explain or justify itself. We might have to think about what is done there, and how it is done. Which is, in a democratic society, a generous public service by the Occupiers.

[1] These facts from the Encyclopedia of London.
[2] Which aren't important. There has been much griping from the Do Nothings about Occupy, I don't intend to join in.
Posted by Unknown at 08:44 4 comments: