With the book launch* fun and excitement dying down I'll be making a return to more regular blogging shortly. Meanwhile here's a quick overview of new and forthcoming print journalism and other writing. 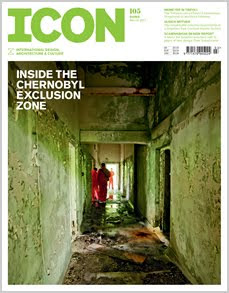 For starters I recommend the issue of Icon that's presently on newsstands. Icon 105 (March 2012) is devoted to Ruins and includes 2,000 words from me on Pripyat, the ghost city in the Chernobyl exclusion zone - this is of course based on my trip there with the Unknown Fields Division in July last year, and is also the first writing to appear from the Toxic Tourism project. More is on the way. There are also ruin-related pieces from my friends Douglas Murphy and Matt Tempest.

The issue also includes my review of William Gibson's collected essays, Distrust That Particular Flavor. Spoiler: I thought it was great.

(Douglas's piece is a riff from his book, The Architecture of Failure, which launches today. Buy buy buy!)

But be quick - at the end of next week Icon 106 (April 2012) will be out. It's a special issue devoted to the mobile phone, the most important object of our time, and includes a short piece by me on how mobiles have wreaked havoc in film and TV drama. There are a tonne of other pieces as well by writers including Will Self, Lee Rourke, James Bridle, Kieran Yates, Kazys Varnelis and many more. Plus a review by me of a new book about the Allende government's Cybersyn project. Spoiler: I thought it was great.

Back to longer pieces. I'm proud to be included in the first issue of Transgressive Culture, a new academic journal examining all aspects of transgression. There's a table of contents for issue 1 here - my contribution is an essay-length review of FUEL Publishing's book Dressing for Pleasure (link mildly NSFW), which looks back at vintage British fetish magazine AtomAge. Pick up a copy of TC if you can, there's some great stuff in it.

I'm also proud to be in the relaunched Architectural Review Australia - at the printers now and out shortly. The theme of issue AR124 is "Architecture and the Body" - my contribution looks at Victorian asylums, how their builders thought a good building could heal a troubled mind, and how that thinking later influenced the rise of the suburb.

And in case you missed it on Twitter, here's a piece I wrote for Untitled Books about "My Week".

* Did I mention I have a book out? In case you somehow missed my round-the-clock hawking of my novel, please go and buy it now.
Posted by Unknown at 03:44 No comments: