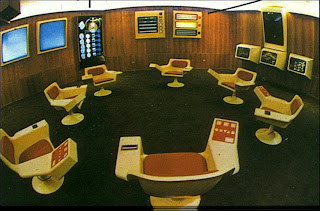 A first for me: I have a piece in the New York Times, relating David Cameron's "Number 10 Dashboard" app to Stafford Beer's "Cybersyn" system for democratic socialism, as proposed for Salvador Allende's Chile. It's a welcome chance to point people to Eden Medina's recent book on the subject, which I reviewed for Icon earlier this year (Icon 106).

As well as Medina's book, here's a full accounting of my sources: 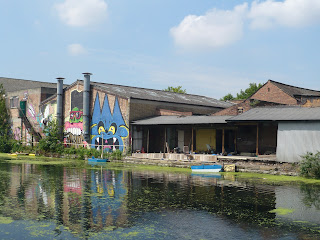 Yesterday I was a guest on Kit Caless's wonderful Resonance FM show "Mapping the Metropolis" alongside the author and critic Lee Rourke. We talked about canals and "stunning canalside developments". Banality, regeneration, psychosis, dead zones, network society, the general awfulness of residential architecture ... it's all a bit of a blur in retrospect but I had a lot of fun and hopefully it seemed an amusing and stimulating hour. Anyway the whole thing is up on Soundcloud now, so have at it. I can't be certain but I think we went the whole hour without mentioning I__n S______r. There's also music.
Posted by Unknown at 09:41 No comments:

There's a fair amount to report in November, to make up for a fairly quiet October*.

The book
First up, Care of Wooden Floors is now on sale in the USA by Amazon Publishing/New Harvest, and throughout November it's just $3.99 on the Kindle as part of the Kindle 100 promotion. However I do urge you to consider buying the hardback, which is a beautiful object.

Here I am talking about the book from Amazon's own video, against a variety of scenic Shoreditch backdrops.


Here I am at the Huffington Post talking about the somewhat unusual business of being the first debut novelist published directly by Amazon. I was also interviewed by the New York Times and NPR, and the book has had some really good reviews, including this rave from the Pittsburgh Post Gazette. Many more nice reviews on the Amazon page, if you should be so inclined.

Also I understand that Puulattian Kunnossapito, the Finnish edition of COWF published by the good folks at Moreeni, is also out now. Or very soon. Physical copies of it exist, anyway, look: 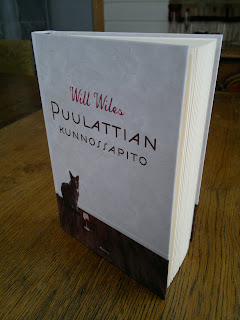 Thanks to my Finnish translator, Seppo Raudaskoski, for that photo and for rendering the book into Finnish.


Talking (mostly in south London)
On Wednesday 7 November at 1pm Lee Rourke and I will be taking part in Kit Caless's series Mapping the Metropolis on Resonance FM. We will be talking about canals, a subject dear to Lee's heart. (If you haven't read Lee's book The Canal, you really should - read John Self's review, linked above, if you're not sure.)

On Wednesday 14 November at 7.30pm I'll be interviewing the incomparable Jonathan Meades about his new book, Museum Without Walls, at the wonderful Bookseller Crow in Crystal Palace, south London. Here's a Facebook page for the event, and here's an Eventbrite page where you can reserve a ticket. The event is free, but likely to be very popular so it's worth RSVPing. Building Design subscribers can read my review of Museum Without Walls here. I gave it five stars - it's really, really good.

Lastly, but not leastly, on Tuesday 20 November at 7pm I'll be taking part in a fantastic evening of short stories at the Review bookshop in Peckham, part of the Peckham Literary Festival. It's a really great line-up: Benjamin Wood, author of The Bellwether Revivals, Nikesh Shukla, author of Coconut Unlimited, Jim Bob, author of Storage Stories and Driving Jarvis Ham, and Sam Mead, author of A Thing That Was Built to Be Torn Down. And me. FREE.


Writing
I have six (six!) very short stories in issue 3 of Disegno magazine (which has a sharp new website). They each describe an "erotic" (or sensual, at least) reaction to a design object, and each is inspired by a true story told by the designer of each piece. It's an experiment in design fiction, but it's not Design Fiction, capital D capital F, in the strictest sense. Some of the stories are funny, some are sad, each taps into that emotional or sensual side of a piece - I'm a shade (50 shades?) uncomfortable with the e-word because I always hear it in the sexful tones of Zapp Brannigan.

Also there are a couple of new Cabinet pieces on the loose. First is a history of that maddening garment, the straitjacket, in Cabinet 46, which is on stands now. Second is an introduction to the fascinating Phillips Hydraulic Computer, a water-powered model of the British economy, in Cabinet 47, out shortly.

Some reviews are also now online: on Edwin Heathcote's charming book The Meaning of Home in Building Design (£, sorry) and on the Barbican's  "Designing 007: 50 Years of Bond Style" in Icon.

I think that's everything ...

* Outwardly quiet - we had a baby, and it was the longest and busiest month I can remember, even though it involved very little writing work. All very worthwhile though.
Posted by Unknown at 09:55 4 comments: