This article originally appeared in Smoke: A London Peculiar #16 and is reproduced here with permission. 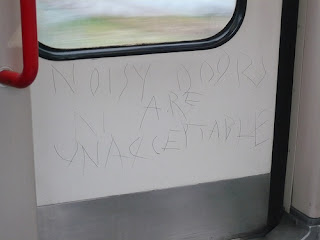 Someone is fighting a lonely war against noise on the Central Line. The shrill tone that announces that the doors are closing is too loud for them, or too high-pitched, or both. They scratch their complaint into the doors: Excessive Door Noise; Noisy Doors Cause Deafness; Too Loud. Always the same hand, the same terse concision. How long has this been going on – scratch-scratch-scratch attrition on one side, deafening psy-ops on the other?

Meanwhile, almost unnoticed, part of the Central Line has lost its voice. Perhaps the anonymous vigilante of quietude is pleased, but it’s really a cause for sadness: The Leyton Roar is gone.

At its furthest eastern reaches, between Epping and Debden, Central line trains roll through actual countryside – fields, cows, hedgerows. Heading west, towards London, the city composes itself out of fragments. Scattered semis link arms into terraces, playing fields shrink and evaporate, urban pressure closes in around you. At Leyton, the gathering density pushes the line underground.

As if to make it clear that Leyton is a threshold, there is an enormous, crowded Catholic cemetery next to the station. Graveyards are traditionally placed at a city’s edge, for hygienic reasons and to satisfy their demands for space. The approach to the tunnel mouth has none of the flamboyance of the cemetery, but there is a grave quality to it: the long downward slope is like the ramp leading into the tomb of an ancient civilisation. This sense of the monumental is reinforced by the rising filthy retaining walls, bruised pink like the walls of the Forbidden City in Beijing or Delhi’s Red Fort, or the exhausted moquette of older Central Line seats. The portal itself is modest, stained with decades of abyssal grime.

This eastern entrance to the city used to be far more impressive, though, for it had an aural architecture too: The Leyton Roar. When a westbound train entered the tunnel, a powerful wave of air would blast through the carriage with a high-volume shriek, loud enough to silence any conversation and surprise the unsuspecting: people would be cut off mid-sentence, or roused from their newspapers. Even for city ears accustomed to tuning out announcements and the Tube’s general background thunder, this noise was impossible to miss. It was a signal, a portent, an apocalyptic howl that far exceeded the usual Underground cacophony. Like a triumphal arch or a gate, it announced that the train had entered the city. And now this landmark is gone. Now, there is simply a dull whoosh when the train slips into the tunnel. No one looks up, and conversations continue.

The sudden disappearance of The Roar unnerved me. Why had it gone? The trains were the same, the tunnel was the same – how could the sound of the journey change so dramatically? These changes are important. If such a noise made a sudden appearance in a routine journey, it would give pause for thought; its disappearance might be more subtle, but is no less significant.

I e-mailed the Transport for London press office. A month passed without reply. I e-mailed again. This time, there was a response, from Benedict Pennington, head of the London Underground press desk. “I believe the difference you will have noticed will be as a result of track and ballast replacement,” he wrote. “This involves removing all the rails and aggregate which the rails sit on, and replacing them with continuously welded rails, rather than blocks of jointed rails. This would alter the ride noise on board our trains.”

That wasn’t wholly satisfactory. The Roar hadn’t seemed to be a product of the ride noise of the trains. But if the removal of the aggregate meant there was now more space, then maybe the train would be less like a piston smashing against a wall of pressured air as it entered the tunnel, resulting in a quieter passage – maybe? “Track ballast replacement” – it was shaped like an explanation, and filled the hole where an explanation should be, but did not really explain anything.

Once a day I still listen out for The Leyton Roar, and listening for a sound that isn’t there breeds a kind of super-sensitivity – it’s as if there is now a negative space where The Roar once was, a new space of quiet carved out of the Tube thunder, in which creaks and sighs that would otherwise rush past unnoticed suddenly stick out; and that thickening in the ears, that perceptible increase of air pressure against internal membranes, that movement of blood in the darkness – a new roar.

Meanwhile, the scratch marks still appear on the doors: Noise Pollution; Inappropriate Door Noise. Somewhere out there, the Noise Vigilante is still at work.
Posted by Unknown at 06:26 1 comment:

The Bookseller has a story about the news:

HarperPress has pre-emptively bought the debut novel by Will Wiles, the senior editor of architecture and lifestyle magazine Icon. Publishing director Clare Smith has bought world rights, excluding North America, in all languages to Care of Wooden Floors from Antony Topping at Greene & Heaton. The book will be HarperPress' lead literary launch title in spring 2012.

The publisher said the book was about a friendship between two men who do not know each other very well and how a tiny oversight can trigger a chain of consequences.

Smith said: "Dark, funny and compelling, this novel takes your breath away with its extraordinarily distinctive writing. The voice is unexpected, constantly, but consistently conveys a universal human experience that pulls the reader right into the world of the narrator. The entire team fell passionately in love with the book. We could not be more delighted to be publishing Will."

Strangely, seeing the whole business reported as news like this makes it feel less real. But I'm seeing the unfolding reaction from the under-real environment of a Paris hotel room, after a 6am start and about 800 espressos. Anyway, between this and the outpouring of congratulations on Twitter and across my various email accounts, my cup runneth over.

ON EDIT: Here's the text of the press release from HarperPress:

On the eve of the Frankfurt book fair, Harper Press is thrilled to announce the acquisition of a distinctive new literary talent. Clare Smith has acquired World rights, all languages, excluding N.America, to Care of Wooden Floors by debut author Will Wiles, in a pre-emptive bid.

Care of Wooden Floors is about how a tiny oversight can trip off a disastrous and farcical (fatal, even) chain of consequences. It's about a friendship between two men who don't know each other very well. It's about alienation and being alone in a foreign city. It's about the quest for perfection and the struggle against entropy. And it is, a little, about how to take care of wooden floors.

Will Wiles is senior editor of Icon, the monthly architecture and design magazine, and he lives in London.

'Dark, funny and compelling, this novel takes your breath away with its extraordinarily distinctive writing. The voice is unexpected, constantly, but consistently conveys a universal human experience that pulls the reader right into the world of the narrator. The entire team fell passionately in love with the book,' said Smith. 'We could not be more delighted to be publishing Will.'

Care of Wooden Floors will be published as the lead literary launch title for Harper Press in Spring 2012. Tara Hiatt, Head of International Rights at HarperCollins, will be handling translation rights. The agent is Antony Topping at Greene & Heaton.

Labels: books, care of wooden floors, me me me, my writing
Newer Posts Older Posts Home
Subscribe to: Posts (Atom)