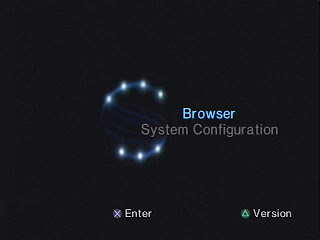 A couple of weekends ago I bought a Playstation 3. This act brought to a close my long relationship with my Playstation 2, and I feel moved to mark its passing with a tribute. I have owned my PS2 for more than 10 years - it is, without doubt, the single most reliable piece of electronics I have ever had in my possession. It still works as well today as it did when I bought it in 2000 or 2001, and I can't remember it experiencing a single major fault. And that's in spite of the fact that it - or rather, the controller attached to it - has taken some serious button-mashing punishment. And it may yet have more days in the sun, as it still works perfectly and I'm not planning to get rid of it just yet.

But part of my sadness in disconnecting the PS2 came from an unexpected source. I found myself thinking about the console's menus. When I fired up the brand new machine, I was rewarded with a calm grey screen, across which something like a wisp of smoke was blowing, and a sound of stringed instruments, a little like an orchestra warming up. The menu graphics emerged around this wisp. Which was all very nice, but it lacked something. It lacked depth.

By contrast, the PS2's menus had depth. They were all depth, on the surface at least. Switch on a Playstation 2 and it would chime pleasingly, and once the corporate introductions were out of the way you would be ushered into the blackness of space. Standing between you and the inky void were arcane signs: the words "browser" and "system configuration" and a constellation of orbiting points of light, dancing around themselves in a ring. (See image above.)

There's no need to understand what any of that means. Consoles, unlike multi-purpose desktop computers, are mostly designed for supreme simplicity - they just work. You don't have to poke through menus and dialogue boxes to fire up a game or play a DVD or whatever, you just feed it into the disc drive at the front and it starts automatically. So, on the PS2 at least, there's seldom any need to "use" the default machine menu unless you're doing some fairly involved tinkering. It is mostly just a default space, a view of the system at rest. It's accompanied by a calming ambient soundscape - barely even close to music, just gentle whooshing, like waves against a beach heard from a distance. Rather than just a static screen that eventually switches to a screensaver, like on a desktop PC, this is an interface that is part screensaver - it has a function, but it also has no function but to be, and to show that all is well and in a state of readiness. When you do insert a disc, or select a menu option, one of the orbiting lights separates itself from the circle and drifts away, apparently receding into the blackness, an emissary into the machine.

It is a really beautiful piece of interface design, suggesting a depth of possibility - almost ulimited possibility - without simply bombarding the user with complexity. And it suggests rest without simply being static or hiding behind a screensaver. This kind of screen-based user interface now dominates our lives, on our phones, on TVs, on computers, on cashpoints, on Tube ticket machines, everywhere. For obvious reasons, the discussion of the design of these interfaces has focused on clarity and usability. The PS2 was an example of a highly developed interface where the usability has perfected itself into invisibility, leaving an open space that could be inhabited by something that was, in my opinion, beautiful.
Posted by Unknown at 02:54 No comments: 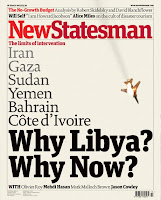 News from the world of print. I am in this week's New Statesman, on sale from today, reviewing Pioneers of the Downtown Scene at the Barbican Art Gallery. I try to put this really very good exhibition in the context of New York's 1970s' near-death experiences, something I feel the curators could have done a bit better.

And of course I continue to infest Icon, although the magazine's online archiving process ground to a halt in summer last year and is now proving difficult to restart. In the current issue I write about Voyager 1 and review the New City Reader and Beyond magazine. In the issue out next week, you can find me profiling the designer Philippe Malouin and reviewing Civil Unrest.

I'm planning a separate post wrapping up all the news related to the book when one or two things about it solidify.
Posted by Unknown at 04:41 No comments:

Labels: index, me me me, my writing

Fox in the Yard

It's my birthday today, and I have the day off. I was off yesterday as well, so at 10.30 in the morning I was sitting in the living room drinking a cup of coffee. Looking out over the sunlight-filled courtyard of my building, I was amazed to see ... a fox. It was standing on the wall, looking straight at me; I ran to get my camera, and it was still there when I got back. 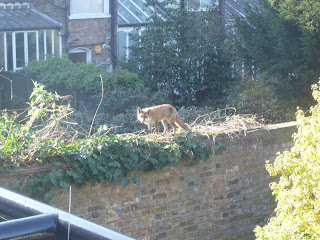 If you click on the photo to see it full size, you'll see the fox is looking right at the camera. It's a little eerie, but also a little magical.
Posted by Unknown at 04:20 3 comments:

Labels: me me me
Newer Posts Older Posts Home
Subscribe to: Posts (Atom)