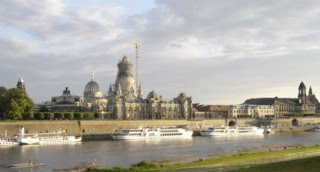 Dresden, with the Frauenkirche still under (re)construction. Photo via Wikipedia, under a Creative Commons Licence.

I was quite prepared for some people to be upset by my recent New Statesman piece attacking the campaigns to rebuild the Euston Arch and the Skylon. As I said in the piece, these groups swaddle themselves in the illusion that no one could possibly disagree with their case. That was the bubble I wanted to prick, and people dislike being deflated. I'm honoured that the response should come from none other than the architectural historian Gavin Stamp, trustee of the Euston Arch Trust.

In a letter in this week's Statesman, Stamp writes:

In his card-carrying neophilia, William Wiles rather misses the point about the desire to re-create lost monuments such as the Euston Arch and the Skylon (Arts & Books, 17 August). Great architectural monuments are both of their time and yet timeless, in that they continue to mean something to subsequent generations. Their destruction, especially when unnecessary or criminal, therefore becomes all the more lamentable. Which is why Ypres was reconstructed as it was after the First World War and the centre of Warsaw rebuilt after the second, and why, more recently, the bombed Frauenkirche in Dresden has been immaculately re-created. The London & Birmingham Railway erected a monumental entrance to Euston Station to symbolise the colossal achievement of building the first mainline to the capital. To rebuild that lost Doric "arch" now would be a gesture of confidence in the most civilised form of transport known to man.

Was the Euston Arch such a "great architectural monument"? Maybe if it had not been demolished it would have continued to mean something to subsequent generations. However, it was demolished, and I would contend that it was less than a generation away from being almost entirely forgotten. It means almost nothing to my generation, and I can't imagine it mattering any more to the next. In its present state as a lost building, it has some meaning, but not the meaning that London & Birmingham Railway intended. We'll come back to that.

The relevance of Ypres and Warsaw escapes me. Rather than being a purely symbolic propylaeum, they were functional city centres. They had to be rebuilt. As I said in the piece, an act of reconstruction is also an act of erasure: it wipes away the circumstances of the destruction. When the destruction was the result of a vast national trauma like a war, one can understand the desire to promptly rebuild things as they were, as part of a national recovery process that is as much psychological as it is to do with restoring buildings. But the Euston Arch was not the result of a war or invasion, and its loss - whatever the Euston Arch Trust might say - was not a comparable national trauma.

The Frauenkirche in Dresden is an interesting case. Again, the loss of the arch is in no way comparable - the Frauenkirche was the linchpin of Dresden's skyline. And its restoration was not only aimed at undoing the damage caused by the Allied bombs in 1945, it was also part of the process of symbolically undoing Dresden's more recent history as part of the DDR. Germany's present enthusiasm for restoration and reconstruction is very relelvant here - presented as a harmless antiquarian endeavour, it has the covert goal of wiping out DDR-era landmarks such as Berlin's Palast der Republik. It's an act of erasure.

I believe that the reconstruction of the Euston Arch now would have very little to do with celebrating the completion of the London-to-Birmingham mainline. Nor would it have much to do with casting a vote of confidence in rail -which I'm happy to agree is the most civilised form of transport. To restate what I said in the piece, the destruction of the arch was a symbolic defeat for the forces of conservation and traditionalist architecture in this country - and its symbolism has grown steadily over the years, judging from the melodramatic prose used to describe the demolition. The campaign to rebuild is about undoing a defeat more than any other consideration - any other rationales are simply convenient cover for this prime objective. It's part of a broader cultural effort to discourage the modernisation of the UK in the later 20th century, and to present post-war modernist construction as a malign mistake to be rectified.

If we allow this grudge-match to be played out, I think we will have reached a new low in architectural discourse in this country. Rather than casting a vote of confidence in rail, we will have demonstrated that the 21st century has nothing to contribute to station architecture, and that pedantically settling a half-century-old score was more important to us than stopping the next Euston being the vile, shiny shopping experience it looks like becoming.
Posted by Unknown at 12:39

I agree - in some ways I this this idea of replacing old architecture is a fraud. The town hall square in Frankfurt has been replaced by a a substantial version of a Hollywood screen set. It is all concrete and facade - for the innocent it is the old town square, only if you search the small print of the guide book do you realise it is fake. It would be much better, in my opinion, to construct something that reflects the time in which it was built. If a phoenix is to rise from the ashes - why not a modern bird with new feathers?

Clare, my feelings exactly. The same with the building that's to replace the DDR Palast der Republik - three facades of the former Stadtschloss wrapped around an unremarkable new building.

I've only ever seen photos of the original Euston Arch, but I think it looks horrible. Preserving the past is fine, but we should also look to the future.