Learning What Surface Is 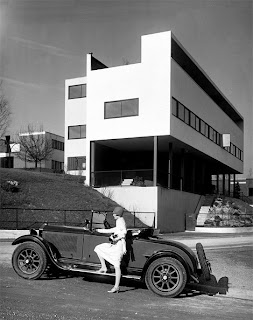 Le Corbusier's Weissenhof. This post is part of an effort to dispose of some longstanding draft posts that have been cluttering my Blogger dashboard.

Le Corbusier and other early modernists signposted the modernity of their buildings by photographing them with (then-)state-of-the-art automobiles in front. In the past 30 years that phenomenon has inverted, and for decades now modern buildings have been used to advertise cars. Is this evidence that car design is getting more conservative while architecture still maintained a reputation for high technology and high culture? Almost four years ago I interviewed Chris Bangle, then group design director for BMW, and asked him about the relationship between car design and building design; what he said didn't make it into the published transcript, but is pretty interesting. I came across it while doing a clear-out of old interview transcripts.

When we were doing the first cars in the 1920s, modernist architecture had already taken off. The first steel & glass skyscrapers were already done in the 1940s, and we were doing cars in the 1950s called Baroque [somethings] – so this whole baroque era which architecture had left behind a hundred years before, cars just discovered back then. We didn’t do cars which looked contemporary with a Mies van der Rohe building until let’s say the 1970s or 80s. If you look at the current 7 Series, it looks perfect against Frank Lloyd Wright’s Guggenheim, which is about very classic surfaces but with very cantilevered forms – that’s were the current 7 Series is. They look perfect together. If you look at the Guggenheim from Bilbao and the C4, they look perfect together – there’s only six years between them. And now, I would say the Z4 is probably the first post-modernist car in the world today. Maybe the 5 Series E4. What will happen when cars become neo-deconstructivist? What will that be? Wow. At the same time the architectural world has switched to our technology - Frank Gehry can only do his buildings because he uses CATIA programs, which were the same programs which were developed for the car industry, and his approach to it is the same way we do cars.

However there are some real interesting differences. The scale difference alone meant that architecture never had to deal with surface before. The idea of a perfect surface for architecure is completely unknown, it doesn’t exist. I’ve had lots of talks with architects about this. It’s wonderful to talk about. You can show them a building and tell them the surface is terrible, and they [react]: “Huh? What surface?”. They don’t even see it because they’re concerned with scale and the impression of space. Cars are about surface. But slowly, slowly, architects are learning surface. I can feel quite proud now that we are having a reverse affect on architects. They will still lead because they are the social moulders of our culture, architects are. We are a component that reflects the culture, but they are the moulders of that culture. I think that’s an important distinction. We hold architects holy in that sense. But at the same time, every piece of architecture is perfect, whereas what we do is mass. And it will be interesting to see what happens when architecture becomes more and more responsive to the exigencies that cars have established and they finally learn what surface is.