The decline of incest as a marketable theme [in pornography] is probably due to today's inadequate middle-class housing. In large Victorian houses with many rooms and heavy doors, the occupants could be mysterious and exciting to one another in a way that those who live in rackety developments can never hope to be. Not even the lust of a Lord Byron could survive the fact of Levittown.

This theme is being supplanted by sadomasochism, Vidal says, continuing:

In the film The Collector, a lower-class boy captures an educated girl and after alternately tormenting and boring her, he says balefully, "If more people had more time and more money, there would be a lot more of this." This got an unintended laugh in the theater, but he is probably right. Sexual experiment is becoming more open.

A certain kind of sexual outrage needs space, privacy and time to percolate. This occurred to me when I read on BoingBoing about the internet activity of Philip Garrido, the kidnapper and rapist who - among other crimes - abducted an 11-year-old girl in 1991 and held her captive for 18 years. Growing participation in the internet - and the curious durability of many of the traces we leave on the net - mean that when crimes like this emerge, we now have the dubious honour of being able to see what the culprit wrote on his blog and elsewhere. Even more chilling is the fact that Garrido's house in Antioch, California, is clearly visible on Google Maps: 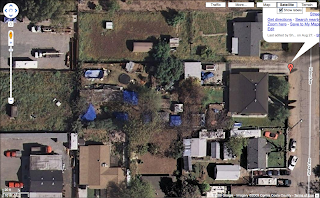 And can be seen on Google Street View: 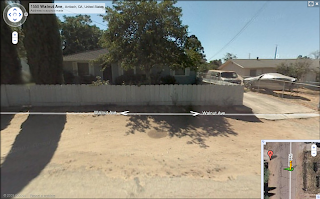 In the aerial view, the complex of tents and structures in which Garrido kept his victims can be clearly seen. Apparently the neighbours heard nothing from these installations, which suggests a degree of solidity. If the neighbours can be believed.

There are obvious parallels with the equally abominable case of Josef Fritzl, the Austrian man who kept his own children captive in a purpose-built cellar/dungeon. Last year Nicholas Spice wrote a superb essay in the LRB exploring the Fritzl case through the writings of Elfriede Jelinek, the Austrian Nobel laureate. Spicer explores the implications of what Fritzl was doing in building his cellar:

Above ground, Josef Fritzl obeyed the rules of ordinary time and causality, the rules that say actions have consequences and are subject to the constraints of conscience (das Gewissen); but when he went down into his cellar, he left all this behind to enter the timeless underworld (das Ungewisse) of his desires. As long as no one found out, it was as if what he did down there had never happened (if he’d killed his children and grandchildren, he said, no one would have made a fuss). Jelinek calls what Fritzl did to his daughter a ‘performance’, the addictive acting out of a pathological need. In building his cellar, Fritzl was building a compartment of his own mind, a theatre for the nightly performance of his fantasies. Elisabeth Fritzl’s grotesque misfortune was to be imprisoned in this compartment, to be trapped inside her father’s head.

It's almost as if there's an architectural typology associated with these cases. A certain kind of structure is created by a certain kind of mind - explored in art in John Fowles' novel The Collector, the film of which Vidal mentions above. They make the space, this microcosm of their desires, and the space gives them the privacy and time they need.

What potential is there to expose cases like this through examining land use? Last year I briefly explored writing a feature about Detroit, the poster child of urban degeneration, with regard to urban farming and re-ruralisation. In the course of this research I spoke with Interboro Partners, a New York-based architecture practice that contributed an intriguing project to Actar's Verb: Crisis. Interboro's interest is "blots" - places where homeowners in semi-abandoned neighbourhoods of Detroit have taken over vacant lots next to their houses, disrupting the suburban grid. Interboro told me about how they use Google maps to look for "blots", and how they were getting better at identifying them from above. Could homes like Garrido's be identified similarly? Or could the process be automated, in the same manner that the police now use thermal imaging cameras to identify suburban homes that have been turned into cannabis factories? Researching "augmented reality" for the new issue of Icon, I was intrigued to hear that the same technology that is used to "recognise" faces on CCTV cameras could be used to recognise buildings - so if you were wondering what a building was, you could take a picture of it on your phone and an internet application could tell you who built it, when, why, and what it does now.

This is utterly fanciful as camouflage is second nature to the psychopath and the abuser and they'll cotton on to Google Maps and crowdsourced detection soon enough. One of the reasons these cases are so disturbing is the way the abusers apply surface touches of domesticity to the nightmares they design and build. I'm also struck, again, by Spice's description of Fritzl building a model of the inside of his head, a space in which his fantasies could be acted out for real. There's a curiously memorable B-movie thriller from 2000 called The Cell in which Jennifer Lopez travels into the subconscious of a comatose serial killer. What makes the film memorable is the depictions of what the inside of the killer's head is like - surreal, Byzantine palaces and landscapes. But what seems more likely than that sort of landscape is a kind of perverted domesticity, like Gregor Schneider’s terrifying 2004 Artangel installation "Die Familie Schneider", or the "village" in Jerome Bixby's similarly terrifying short story "It's a Good Life". (Be warned that the Bixby story, if you don't know it, is the kind of thing that haunts you for life - it shook me up terribly when I first read it in my teens.)

I don't mean to linger too long on these matters for the obvious reasons. My interest is that we all attempt, on one level or another, to turn our homes into models of the inside of our heads, and this is to some extent one of the themes of my book. In Care of Wooden Floors, a control-freak minimalist invites a more lackadaisical friend to look after his flat while he's out of the country. The flat is the precise reflection of the control freak's desires and ambitions, and as such leaving it in the hands of another is a difficult thing to do. His reluctance to let go manifests itself in compulsive note-making - everywhere, there are notes explaining the contents of drawers and what is and what isn't permissible behaviour from the flatsitter. It all leads to disaster. By stepping into someone's home you're stepping into a kind of myth of themselves, a hard projection of their psyche into the physical world. Once you start seeing homes like this, they can be pretty unnerving places. Maybe this is why I like hotels so much.

Will, great post. My wife and I bought a beautiful old rowhouse in Philadelphia in 2007; it was previously owned by three siblings that had lived their since their births (only one sister was still alive, and her declining health necessitated full-time care; hence the sale of the house).

The house was full of artifacts from nearly a century of their lives– expected things like photographs and letters, but also incredible finds like the front page of a defunct newspaper from April 5, 1964 (Negro Leader Slain). We found a wedding ring from the long-dead brother in close approximation with the annulment papers. We found stacks of phone bills from the 1940s. We found stock certificates worth tens of thousands of dollars (only redeemable by the issuee or her heirs) in an envelope in a dusty drawer. We found the deceased sister's honorable discharge from the US Army.

It was fascinating to sift through these artifacts and construct portraits of their lives. Like many who lived through the depression these three were hoarders–I wonder if this bespeaks a cluttered mind, or an inability to let go of the past? In any case, once we got past the sheer volume of stuff in that house (we still live there, but it is no longer the same place), it was a strangely gratifying experience to piece together the stories of these three lonely people.

Have you seen Zizek's Pervert's Guide to Cinema? There's a great bit about the way Bates's house maps out his interiority:

"We are in the cellar from the mother's house from Psycho. What's so interesting is that the very disposition of mother's house, events took place in it at three levels, first floor, ground floor, basement. It is as if they reproduce the three levels of human subjectivity. Ground floor is Ego, Norman behaves there as a normal son, whatever remains of his normal ego taking over. Upstairs its the Superego, maternal superego, because the dead mother is basically a figure of superego. And down in the cellar its the Id, the reservoir of these illicit drives. And so we can then interpret the event in the middle of the film when Norman carries the mother - or as we learn at the end of the film, mother's mummy, corpse, skeleton - from the first floor to the cellar. It is as if he is transposing her in his own mind, as a psychic agency, from superego to id."

I forgot to mention what got me thinking about moving into and excavating our house–when we looked at it with our agent, there were little yellow post-it notes on the light switches and some of the doors, admonishing people (agents and potential buyers presumably) to turn off the lights, etc. It seemed as though these notes were all written in one increasingly angry afternoon, as the writer (a nephew of the owners) used increasingly harsh language in the more remote rooms. The 2nd floor hallway light was marked, "Please turn off the light." A few others were marked in similar fashion. Then one of the bedrooms on the second floor was annotated with "Shut the damn light!" On the third floor, the nephew had clearly lost his cool, for he had written, "WHAT THE HELL IS THE MATTER WITH YOU? SHUT THE GODDAMN LIGHT!!!!!"

Your description of In Care of Wooden Floors reminded me of the mad note-maker.

Guys, thanks for your great contributions. I'm sorry it has taken me so long respond.

Altay, you're so right about the eerie traces of previous owners. I remember finding under wallpaper the outline of a large, old pair of scissors drawn in pencil - clearly traced around the scissors themselves, onto white paint. Why? Boredom while redecorating? The fact that it was a large metal pair with a pointed end made it sinister, weapon-like. I like your notes story - that's precisely the kind of behaviour I'm trying to describe. And it's interesting that you mention hoarding, a fascinating pathology that I almost included in COWF but decided to leave out on the grounds of length. It might be reinstated in editing, but it makes the story a little .... I don't know, I dislike it when writers feel the urge to pathologise everything, oh-I-see-he-was-like-that-because-his-parents-did-this. So I left it out. The mother of a school friend of mine was a hoarder - he lived amid these huge piles of indescribable junk and rubbish. Not filth or squalor - there was no odour that I remember, for instance - just detritus. We used to play the Call of Cthulu RPG at his house. It was a good venue.

Styx, I haven't seen Pervert's Guide, I really should check it out. It sounds good. I'm sure other films could be divided thus, in the manner of Forbidden Planet.