As the World Turns 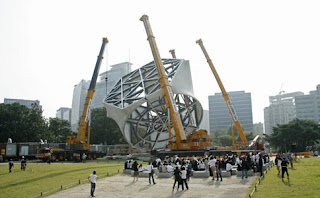 The wonderful image above shows Rem Koolhaas/OMA's Prada Transformer, a temporary structure in Seoul, Korea, being rotated by cranes into a new configuration. Isn't it great? That seems to be a point of contention. E&V's Murphy was sitting next to me when these pictures appeared in my inbox, and he wasn't wowed; another colleague of mine gave it a resounding meh.

The aspect that got the thumbs-down was the cranes. For Murphy and my colleague, they're a bit of a cheat. The structure, sadly can't simply be rolled like a dice; it can't be lifted in the hand and toyed with, as Rem did with the model; it can't sprout legs and turn itself over. It's a bit of a cheat, as we said in the magazine, in the news story linked above and in the subsequent (generally very favourable) feature: "... none of this can be achieved by a few deft twists. Instead it takes three [sic?] huge cranes, a couple of hours and a major refit to rotate the PVC-clad steel behemoth so that it rests on a different side, entirely transforming the shape of the interior." 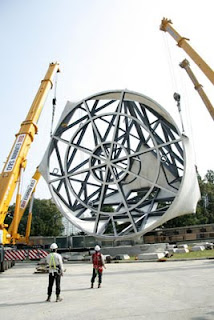 Even OMA and Prada seemed a bit disappointed by the necessity for cranes, because the rotations were not originally part of the events schedule. They are costume changes, to take place behind tastefully placed screens, although the fact that Prada is now issuing press releases with pictures of the process suggests that they might have changed their minds.

I hope they have changed their minds. The cranes are great. Quick or slow, it must be great to watch - I see there are spectators in the photograph. Cranes are beautiful, under-appreciated objects. And the Transformer only really lives in the midst of its transformation; it's as if the building appropriates the cranes for part of its life, like symbiosis in nature, the relationship of the flower and the bee. 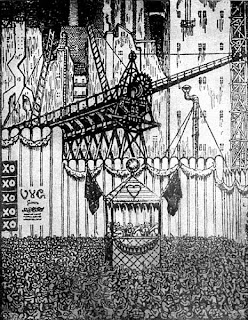 Really, the transformation should be the highlight of the events calendar, maybe with some son et lumiere - an idea that is inescapably reminiscent of the M Dobnyinski's concept for a Soviet mass festival dedicated to a machine-god (above). Koolhaas would presumably appreciate the appropriation of a communist idea for an event space for a fashion label. In October's Icon (076), I wrote the Icon of the Month on Tatlin's Tower*, an unrealised 1920s project for a dynamic, functional monument: part Eiffel tower, part Broadcasting house, its internal volumes perpetually rotating. Casting around for modern analogues to Vladimir Tatlin, I really had to say Rem - this is the dynamic, functional, constructivist monument right here. It's selling expensive frocks ... Ah well. If we can't have Archigram's Instant City, at least we have this.

* If you want an introduction to the tower, Norbert Lynton's Tatlin's Tower, which I read before writing the piece, is very good.
Posted by Unknown at 12:00