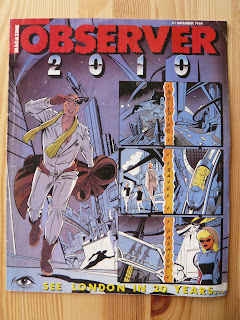 I was 11 in December 1989. We said hello to the 1990s in a farmhouse owned by family friends somewhere in the North. That New Year, the Observer devoted its colour supplement to speculation about what London might be like in 20 years - in 2010. I was mad for cityscapes, sci-fi and futurology, and I really liked the pictures and some of the ideas in this colour supplement, so I kept it. About seven years ago, when my parents moved house, I found the magazine while clearing out my old room - I refrained from throwing it out, thinking it would be interesting to see how it held up in 2010. And here we are. How did they do? 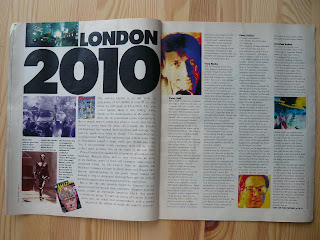 I've photographed all 15 pages of speculation and they're up on my Flickr site, with some close-ups of interesting bits. (NB: click on the photos on this blog post for a closer look.) The text should all be legible. About half of the speculation is architectural - there are also pages devoted to transport and fashion, but I have little to say about them here.

To kick off the section, there are some short columns by Peter Hall (now a Sir, founder member of Blair's Urban Task Force), the late Tony Banks MP, Peter Kellner and the author Jonathan Raban (who has since contributed to Icon). These opening pensees are a stark reminder that London was considered far more of a "problem" back then - a potentially ungovernable, insoluble perma-crisis. London still suffers from terrible problems, and a crippling lack of vision in its governing classes, but beyond the fringe right I think few now see it actually failing and going feral on us.

Hall points to the need for Crossrail and high-speed rail links to the Channel Tunnel and Heathrow - a network we're still piecing together now, thanks broadly to the dismal stasis of the Major years. Banks draws attention to London's lack of a single governing authority - it now seem amazing that such a governmental vacuum was allowed to persist for so long, from 1986 to 2000. Kellner proposes surrender in the face of London's problems and suggests moving jobs around the country with a view to reducing the city's population by 2 million. Raban provides a direct and pithy rebuttal to Kellner's pessimism: "The nastier that London gets, the darker its peculiar charms, so people (not planners, or sensible journalists with a topic to follow) will be seduced by it ... Just as we love the romantic melodrama of the street in Dickens, we secretly love the growing horror-show of the city we actually live in." Hear hear. 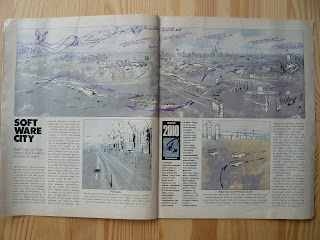 Two different visions of the city in 2010 follow, the first of which is by Nigel Coates and Brian Hatton. Obviously, they get a hell of a lot wrong (London is no longer the capital - and why are blimps so seductive to futurologists?), but in some ways the vision is eerily prescient, even if the details are wrong. They see the influence of Charles persisting and deepening with the result that postmodern and neo-gothic facadism runs riot - "bad buildngs have approved facades", which leaves one to wonder who decides buildings are bad and who does the approving; hopefully not St James's Palace, or the the Carolingian pile Coates imagines built in Liverpool.

Bankside power station has been converted into a museum, although here it's the "Thatcher Museum of Commerce" - one shudders to think, presumably it would be full of brick-like yuppiephones and British Gas share certificates. (Tell Sid I'll meet him in the gift shop.) Another post-industrial museum is Waterloo station, part of which has been converted into a "Museum of Suburban Life". The other defining feature of Coates' London is high-tech parasitism, with exposed services, ducts and blobs creeping across the exterior of the city's buildings. He predicts the yuppification of Trellick tower, although suggests that its facade might need "softening" with a few blobs to allow this to happen. Other towerblocks have been "allocated to young single homeless at near-zero rents, giving limited sanction to social deviance".

Other aspects of the vision are beguilingly whimsical. "Crystalline telecommunications spires spike a new skyline ... Sony World Bank polysteeple overshadows the NatWest Tower, now a block of flats." The most interesting aspect of Coates' vision is his suggestion that the urban debate has shifted from "hardware" to "software" - away from monumental new building and towards flexibility, adaptation and reuse (those parasitic services and pods, and I presume the first inklings of the optimistic Blairite "live-work unit"). But this clashes with his belief in the continuing relevance of Charles - Charles, after all, stands firmly on the side of stasis. One thing Coates and Hatton get spot on: "King's Cross still a building site". 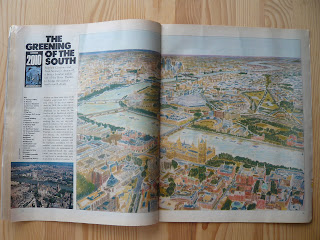 The second vision, by Stephen Gardiner and Joan Scotson, is much more conservative and also more tedious. It mostly consists of the removal of things that they don't like: St Thomas' Hospital, the Shell building, the Elephant & Castle complex and "high-rise housing" in general. Mostly, these are replaced with open space. The city's inner main roads are mostly also "replaced", with car-based commuting almost entirely replaced with public transport. They are light on details as to what form that public transport is to take. But by and large the vision starts with the premise that the city's history since about 1939 was a mistake, and should be set right. You can imagine.

Anyway, do go and check out the pages - my photographs are sharp enough to read the text clearly, and it's interesting stuff. Bring on 2030.
Posted by Unknown at 08:11

Maybe you need to do it yourself and post "Spillway's predictions for 2030?" Thanks for photographing this, it was great fun to look at.

Fascinating stuff. Well done and thanks for posting it.

Does it say who did that cover drawing? Looks like an interesting example of the 80s revival of the Atom Style.

Paul: "Cover illustration by Mark Thomas" it says on the contents page.

Thanks Will. Haven't heard of him. Nice piece of work though.

I appreciate you may not have been that bothered about the fashion section, but I read it with great interest. Whilst John Galliano's claims that we may be wearing clothing that changes colour with the temperature sounds a little too Global Hypercolour, the quote from Richard Nott at the end of the article is scarily on the money: 'the padded shoulder will sum up the retro 80's look 20 years from now'. This overexaggerated 80's revival silhouette is absolutely everywhere at the moment, from Victoria Beckham to Primark, a quite incredible coincidence.

Check out the cars from the future....picture number 10. Looks remarkably like a Ford KA. And the designer? Aram Kasparian, head designer at Ford!

I well remember this article...and the magazine stayed in my 'muswt keep pile' for years, until inevitably it got chucked. Fascinating to re-read. Inevtitably with any future gazing a bit hit and miss...and begs the question 'What if...'

Nice reading (not very comfortable eyeing) guess remember there were color scanners by that time, with a bit of effort you can get a great pdf cpy on net about documents difficult to find thesse days, good job anyway

really interesting stuff!!! - I've linked to this page on my blog

Well this is really looking cool and nice i am totally impressed. Anyways keep it up and keep sharing.

In case you haven't seen yet, the Observer itself posts both a look back at its predictions and a series of predictions for London in 2030.

Thanks for photographing this, it was great fun to look at.

London is really a lucky city because it has been built 100 years ago and since then living on inheritance. If you really want to see how other people's cities change, I suggest you go and have a look at Seoul. Now that is a change. London is still running with underground that is 100 years old.

I very hardly ever study different blogs on web since most of them are time losing technique. However , I have to say that this post is totally opposite way round.