The Exoderm of the Edifice 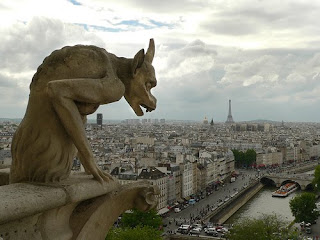 Image taken from the Flickr photostream of Simon & Vicki and used under a Creative Commons licence.
Graham Robb has written a fascinating article (subscribers only, sadly) in the new LRB on the subject of Michael Camille's new(ish) book The Gargoyles of Notre-Dame: Medievalism and the Monsters of Modernity. Robb writes:

As Michael Camille points out, gargoyles bear the brunt of the weather: they are part of ‘the exoderm of the edifice’, eroded by the water they channel away from the building. They were never intended to last, which might account for their flippancy or irreverence: they were temporary, decorative items; like court jesters, they could express unpleasant truths. The other projecting sculptures, known as chimeras, have no such excuse, and no one knows for certain in what spirit those fish-lipped mutants, flesh-tearing ghouls and masturbating demons were produced. Camille supposes that the medieval artist, ‘in order not to be unnerved by the evil eyes of the devils he was called upon to carve, often ridiculed them’. If so, the devils had the last word: was it really a fearful, superstitious artist who carved the little imp in the central portal (one of Viollet-le-Duc’s favourites), whose tongue protrudes in concentration as he buggers a king with a stick?

"The exoderm of the edifice" is a great phrase, perfectly capturing Camille's meaning: the outer skin, which flakes away. It is fascinating to consider that medieval masons might have been farsighted enough to consider parts of their structures essentially disposable; that they considered the long-term decline and ruination and restoration of the buildings they worked on. One thinks of the (sadly apocryphal, as discussed in this Quiet Babylon post) tale of the New College trees. Entire lines of masons, passing on the same skills in an unbroken chain of apprenticeship to maintain the same buildings, which in a state of permanent renewal - looking at the ancient cathedrals as things that are continually restored rather than subject to periodic total restoration, one can see the masons' scaffolding as being part of the structure itself, like the window-cleaning cranes on top of modern office blocks.

My own theory about pre-modern architecture (which I've nursed privately for years safely away from malign influences such as evidence or research) is that its standards of craftsmanship were partly a response to the longevity of building projects against the short lifespans of their workers. Many of the workers would never live to see a great building finished; if they were going to spend all their life toiling over one particular flying buttress then, by golly, that buttress was going to be the finest thing you ever saw.

Returning to the Robb piece, it's a real shame it's behind the LRB subscriber wall because it really is a splendid read, covering Viollet-le-Duc's "restoration" of Notre Dame and the pathological relationship of that church's gargoyles with the city of Paris. Pick up a print copy while you still can, or order one. Robb ends with a sad look at a more recent restoration which eliminated much of the threat from Notre-Dame's stone animals, giving them playful expressions and smirks in line with the Disneyfication of the gargoyle.

The piece has some personal meaning to me. I grew up in Oxford, home to one of the finest collections of gothic architecture outside Germany. Gothic was my first architectural love - and I mean proper medieval perpendicular gothic, not the prettified gingerbread version beloved by the Victorians. (I'm not writing off all Victorian gothic, some of it is very fine, but much is frankly regrettable.) My childhood memories are populated by blackened walls, spiky skylines and gargoyles, which my parent delighted in pointing out. Oxford has its drawbacks as a place to live, but it was a magnificent laboratory for a child's imagination, and in retrospect its clear why I fell upon the work of Mervyn Peake, MR James, Edgar Allen Poe and HP Lovecraft when I did.

But something terrible happened to this crumbling, mysterious Oxford. It was cleaned. In the 1980s and early 1990s a tide of restoration swept the city and college after college disappeared under scaffolding only to re-emerge gleaming and transformed. University College and Magdalen were particular shocks. They no longer looked particularly old. Oxford today looks, bizarrely, a far younger place than it did in the middle of the 1980s.
Posted by Unknown at 05:18

Labels: architecture, heritage, me me me, regeneration

Ah, Viollet-le-Duc. He and I share a birthday, don't you know. I wrote an essay about him during my undergraduate years, discussing his fights with the Beaux-Arts and his proto-functionalism.

It was thus a strange delight to see him repeatedly denigrated in Proust as an example of a vulgarian with no respect for the ages...

I've always preferred the French Gothic to the English Brand. I mean, Bath Abbey is brilliant, but it's not as batshit crazy as Rouen, y'know?

Fanastic as it is, I wouldn't hold up Bath Abbey as the ultimate example of English gothic. Ely! Wells! King's College Chapel! Hawksmoor's All Souls College in Oxford!