Why Ambassador, With This Perimeter You Are Really Spoiling Us

I was in the Independent yesterday, mounting a weak defence of a heavily defended building. 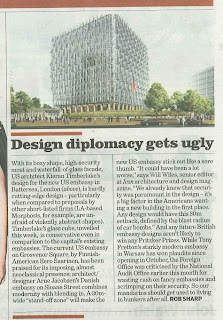 A 30m-wide "stand-off zone" will make the new US embassy stick out like a sore thumb. "It could have been a lot worse," says Will Wiles, senior editor at Icon architecture and design magazine. "We already knew that security was paramount in the design – it's a big factor in the Americans wanting a new building in the first place. Any design would have this 30m setback, defined by the blast radius of car bombs."

This "stand-off zone" is one part of what's called "hostile vehicle mitigation" or "HVM" - a field of building I'm pleasantly well informed about, having attended a conference on designing for terrorism last year*. There are such things, for instance, as armoured trees; a growing tree can absorb steel bars that will help it stop or slow a rogue vehicle. These hostile vehicles are the car- and truck-bombs that give security planners sleepless nights and twitchy days. As I told the Indie, they're the reason the Americans have decamped to Nine Elms (they wanted a site with the necessary space for the defensive zone). The defensive zone itself was always going to be heavily landscaped, because if vehicles can just drive into your stand-off it's not much of a stand-off. And so all this "it's a fortress behind a moat" talk is old news - that is what the Americans wanted and what Kieran Timberlake has delivered. It's what all the other architects delivered as well. 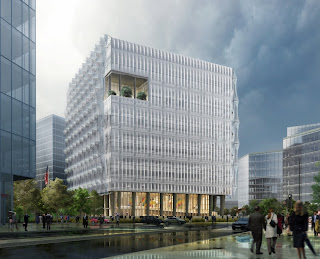 Kieran Timberlake's winning design for the new US Embassy in London.
I don't see anything particularly fortress-like about the building itself, although the vaguely Corblike pilotis do suggest the hem of a skirt raised against scurrying al-Qaeda mice. Its apparent isolation and aloofness are products of the defensive zone. The contradictions built into the brief must have been impossible - welcoming but defended, open yet closed, War is Peace. This inscrutable International Style Cube is a suitably ambivalent response to that. A winsome and civil bit of Scandinavian modernism, all civic manners and democratic openness, would have been duplicitous to the point of being highly sinister. As I said to the Independent, but they didn't quote: "The symbolism seems rather appropriate to me: a shining city on a hill, surrounded by the most formidable defensive network ever known." And that skin also has potential. A complicated double-surface like that, with its brise-soleil, makes me think of fractals, and the way they contain a small area within a long boundary. It's as if the surface of the embassy has the potential to cover a far larger building, perhaps up to the street edge, but the building has shrunk back. Forgive the simile, but it's like the wrinkled skin of a detumescent penis. I mean that in a good way. Really. 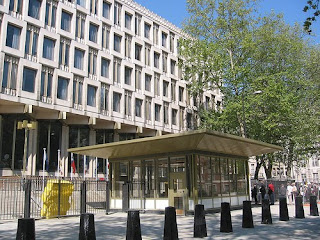 New security structures outside the existing US Embassy's building in Grosvenor Square. Image from the embassy's own Flickr stream.
Duplicitous to the point of being highly sinister. I had to visit the American Embassy on Grosvenor square to get a media visa shortly before Christmas last year. Interfacing with the State Department's bureaucracy is an unpleasant and intrusive business at the best of times, whatever their efficiency and politeness (and they were efficient and polite). But progressing through the improvised security perimeter outside Arne Jacobsen's Eero Saarinen's embassy building was frankly dystopian. Part of a London square was militarised, with heavy hard defences. One progresses from queue to queue before entering the building, progressing to slightly higher echelons of security clearance each time depending on the paperwork one has brought with one. Unsmiling police officers with automatic weapons stare at you, and you realise that if you made a dash towards the building itself, you would have to enter an area of open space that designed as a killzone, surrounded by armed representatives of the Metropolitan constabulary. Behind crossfire plaza is the building itself, its generous Scandinavian spaces seemingly as distant as the country you are trying to visit. The contradictions of that space are horribly unsettling, with a strongly dystopian odour: we can see the structures of a democracy retrofitted with the apparatus of authoritarianism. It gives a sense of how far we've fallen in 10 years.

The new embassy is at least designed with these contradictions in mind, and is consequently fascinating. It's worth taking a step back to really admire what we're looking at: a building designed with explosions in mind. A shape formed by the manipulation of spheres of destruction. It could be the first London building built with attack from the ground in mind since the Second World War. (It's also a testament to the extraordinary power of terror: the fact that a few hypothetical malcontents with A-level chemistry and a driver's licence can race to the head of the queue ahead of a whole gang of other diplomatic considerations.) So, what new forms are these? Going back through my notes from that terror conference is a dispiriting experience; the bureaucratic jargon like "hostile vehicle mitigation" and "exponential decay of blast effect" does not exactly induce good cheer. There are some aspects of HVM that might give pause to Londoners. Firstly, it doesn't stop attacks, it just makes them more difficult and limits their impact. Secondly, it's primarily meant to protect facilities, rather than people. Obviously some people are protected into the bargain - I'm not saying that to make some Spartist the-Yanks-care-more-about-their-office-furniture-than-the-lives-of-honest-cockneys point, it's just a fact of life. 30m stand-off will prevent a truck bomb causing massive structural collapse, but said bomb could still cause horrific death and injury. Thirdly, HVM only protects the one facility, not the buildings around it. The plans for the new embassy show new glass blocks surrounding it at street's edge. Will they still be glass when they're built, I wonder. 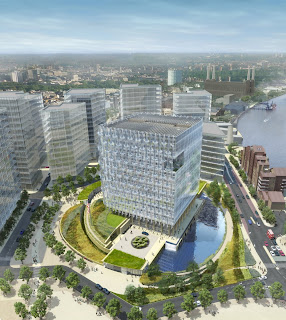 That's something important to bear in mind: the effect of the new embassy's security measures extends beyond the perimeter of the embassy itself.

The Ministry of Love was the really frightening one. There were no windows in it at all. Winston had never been inside the Ministry of Love, nor within half a kilometre of it. It was a place impossible to enter except on official business, and then only by penetrating through a maze of barbed-wire entanglements, steel doors, and hidden machine-gun nests. Even the streets leading up to its outer barriers were roamed by gorilla-faced guards in black uniforms, armed with jointed truncheons.

- George Orwell, Nineteen Eighty-Four, Chapter 1; emphasis mine
The HVM landscaping creates what can be called a "hard zone" of security. There are also nested "soft zones" of security in and around the building: the sight arcs of CCTV cameras, the streets on which you are more likely to be stopped by police or prevented from taking photographs, maybe a "no-protest" radius around the building like the one around Parliament (now scrapped), no-fly zones. The electronic haze of listening devices and broadcasting devices, security down to the ions in the atmosphere. And there are the streets on which one may feel uneasy and prefer not to linger.

The hard defences of Kieran Timberlake's new embassy don't bother me in the slightest. They are obvious, they invite an architectural response, they can be well-mannered and attractive, and they are in their way honest. (I'm reminded of the temporary barricades around Parliament here - unattractive black slabs that were partly reclaimed when people started sitting on them to eat their lunch.) The new US embassy has the potential to be one of the most interesting buildings in London, and I would love to visit it once it is finished (although it's possible I'm now blowing my chance). Hard zones aren't such a big deal - no one complains about the Tower of London, a fortress behind a defensive setback on the Thames. It's these CCTV-covered, drone-overflown soft zones that we need fear. Although ID cards might not be here yet, ID card culture is. We face the slow advance of soft-zone ambivalence, that creeping sense of being unwelcome on the street, a desire to look over one's shoulder. Soft zones are easy to introduce and difficult to shift; they exist in the mind as much as in the city. A bollard is just a bollard, and it can't strike half as much fear into one's heart as the sudden sense that one has brought along the wrong piece of paper.

* "Places Not Fortresses: Can and Should we Design for Terror?", New London Architecture with the Association of Consultant Architects, at the Building Centre, 27 January 2009.
Posted by Unknown at 04:02

I had to spend the entire day queuing for a visa a couple of years back. When I got there I realised I'd left my book behind, and so had nothing to escape to. The boredom was unlike any I have ever known.

Wonderful review. Well thought through and even handed. I think you might be the first person to mention that the constraints shouldn't be blamed on the architects.

Interesting piece, although in the spirit of accuracy (or possibly pedantry) it's worth noting that the US embassy was actually designed by Eero Saarinen, while the Danish embassy in London was designed by Arne Jacobsen.

Rossignol, funnily enough the book I was reading at the time was "The Kindly Ones", as discussed in the posts "Imagining the Nazis" and "Islands of Flickering Light"; in a further coincidence it was below freezing, and I was reading the Stalingrad chapter while shivering and being stared at by men with guns. maybe that's why it had such a big effect on me.

Tom - thanks! D'oh! Obviously, he said weakly, I knew that, I was just hurrying. I have it the right way round in the email I wrote to the Indie.I've corrected the text.

A bollard isn't just a bollard, though, when it's one of those classically styled bomb walls that they built along Whitehall in the last few years... I know it's perfectly a perfectly reasonable gesture, but something about their disguise perturbs me...

obviously the room's soft defenses did not believe the man in the black hat when he claimed he was the notorious Plastinator. one wonders if he left the rude structure and sulkily sought validation of his identity elsewhere..

I am one of the oft-maligned physical security designers of such places. Coordinating and preserving the architects' vision whilst integrating the Owners' requirements for security readiness at the recommended "x" level is akin to herding cats. At the end of the day, however, cash prevails.

Good Blog post as it is giving the information in details.
salarpuria sattva misty charm