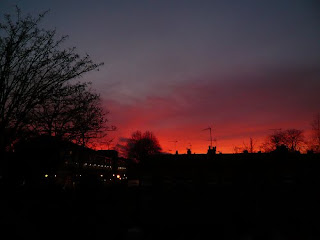 A 500-word short story written on a plane using an idea destined for another project. This was written for the Campaign For Real Fear competition, where it didn't get a place on the longlist. Because of the hugely unsatisfactory last line, I imagine. Or because I screwed up the formatting of my entry, which I did. Or any number of other reasons. Photo from my Flickr stream.

Around the time he stopped drinking, he started seeing the bottles. They had probably always been there, left in the gutter outside his building, but now he noticed them. Just soft drink bottles, Coke and Pepsi mostly, but filled with yellow liquid. It was easy to imagine what this fluid might be, but hard to guess why it was being bottled and abandoned like this. The question preyed on his mind.

Many things troubled him like that. He had cut out the drink one hundred percent, the coldest cold turkey. His days were filled with slow clocks watched with a racing pulse, and anxieties that clawed at him. The nights were worse. With no drink to knock him out, he had forgotten how to fall asleep. Instead he lay in bed, between sheets that felt filthy even when clean, sweat on his face and the palms of his hands, back taut like a bow. As he stared at the ceiling, stained sodium-orange by the streetlights, terrible thoughts came to visit. Every twinge was the warning sign of painful and terminal disease. He would fail, continue the fatal trajectory the drink had shown him.

In this limbo, jaws clenched, small distractions became intolerable. The radio alarm was worst. It was old, and in its senility it had become promiscuous. When it was quiet, and he lay next to it, he heard soft voices emitting from its yellowing plastic shell. The radio was off, volume at zero, but still there were the voices. Often it was the jarring electronic bleating that comes from a speaker before a nearby mobile phone rings. Only turning it off at the mains, killing the clock, could silence it.

Presently he was able to connect the interference with the bottles. It was minicab drivers parking in his street off the main road late at night between their calls. The alarm picked up their radios, and they were leaving the bottles in the gutter after filling them in their cabs. After that, when he heard the radio alarm crackle and voices speak across the electronic gulf, he would go to the window and find the parked car, its driver visible in the light of the dashboard, waiting out the night with him.

One night, after a day spent watching his hands quivering and feeling his heart tighten, an electrostatic bark again broke into his sleeplessness. He listened to it hiss and rip, longing for a second's rest. With the clock past three, he crossed to the window.

The street was empty.

Returning to bed, the static was joined by a voice, quiet and insistent. Angry, sick, he pulled the plug from the wall. The digital display went dead. He closed his eyes.

Still the voice went on, repeating its message into the night. The plug lay on the floor, but the radio alarm spoke, buzzing and whistling through space. "You will die, you will die, I am patient, I can wait, you will die.”
Posted by Unknown at 04:16