Everything That's Ever Happened To Me Happened Right Here 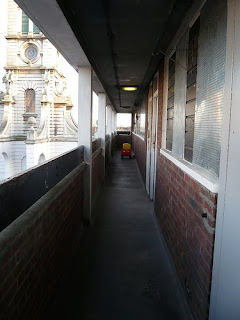 The Market Estate, Islington, days before its demolition. From my Flickr Photostream.

The most moving thing I've read in weeks, courtesy of the London Evening Standard. This piece, a look inside London's gang culture by Tony Thompson, is largely the Standard's usual lawnorder handwringing and scaremongering. But, touring the ganglands of Croydon with a young guide called Radar, Thompson captures an amazing moment:

"I love my ends," he says, his voice thick with emotion. "I can't explain it. People say, 'How can you love a street or a block of flats?' but it's where I come from. It's my roots. Everything that's ever happened to me happened right here. No one can take that away from me, ever. I won't let anyone take it away."

Beautiful. This is civic pride - an earnest attempt to take pride in something, at any rate. It puts a new complexion on the gangs and territorial gang warfare as systems of belonging. And Radar's love for his neighbourhood seems infinitely more genuine than a political establishment that dishes out ideas like Britishness days, "community payback" and national youth service. There's something here that's potentially a powerful force for good, a voice being drowned out by foghorn demonisation that goes almost unchallenged in the media.

(An aside: Radar is/was a member of the "Don't Say Nothing" gang which, by a strange coincidence, I've mentioned in print before, while reviewing China Mieville's book The City and the City.)
Posted by Unknown at 12:25

This is indeed beautiful, and it reminds me of German gangsta rapper Sido and his seminal "Mein Block", about life in Berlin's legendary Märkisches Viertel. An outstanding track, where the usual chauvinist hip hop swagger about hoes and junkies and faggots becomes a source for a remarkable pride in the diversity of the neighbourhood: "... my heart, my life, my world is extending over all sixteen storeys".