In praise of Beech Street 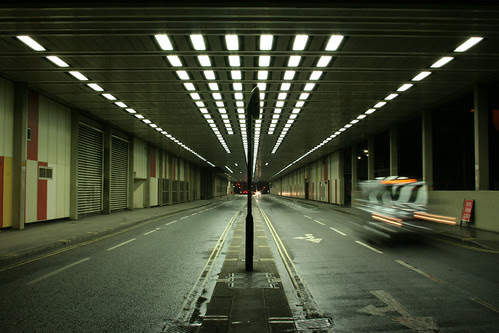 Beech Street. Image taken from the Flickr stream of megapiksel under a creative commons licence.

Beech Street is a special place for me.

For those that don't know it, it's a tunnel that passes under part of London's Barbican Centre, connecting the Tube station with the arts venue's front door. In the minds of the Barbican's designers, it was a way of segregating traffic and pedestrians. Cars would use Beech Street, and visitors on foot could use the landscaped highwalks above.

In fact, plenty of pedestrians (including myself) are perfectly happy to walk through Beech Street. In this Oobject post attacking NY's brand-new Highline, that's presented as a failure on the part of the planners: "[The Highwalk] has become a sad and lonely place and people still use the street level underpass [Beech Street] which is hostile to pedestrians."

Like most of Oobject's baffling complaint about the Highline, this attack on Beech Street is stunningly wrongheaded. The Highwalk gets plenty of use and is anything but a "sad and lonely" place. Beech Street isn't some Trumptonesque New Urbanist Quality Street, but it's not "hostil to pedestrians", either - unlike many underpasses, it's well-lit, the pavements are adequate, the ceiling is high enough, it's as clean as any other street and it gets plenty of use. Britain's cities have plenty of dead streets, far less pleasant and more dangerous than Beech Street, but because Beech Street is an underpass it is immediately written off as a modernist deathmaze.

It's true that it's not the most delightful place in London, and it's sad to report that it probably never will be. Underpasses aren't easy places to get right, but their enormous utility is such that we should at least have a look at the things Beech Street does get right - the things that make it special to me. 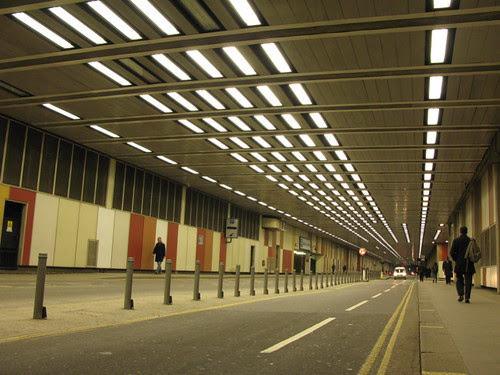 Image taken from the Flickr stream of Tristam Sparks under a creative commons licence.

For a start, there's the lighting. Splendid, isn't it? In this arrow-straight tunnel, the overall effect is of a Renaissance study in perspective with the guide lines left in. Combined with the vertical coloured panels, it creates a sense of movement that works well both at walking pace and in a car.

There's also a personal meaning to the place for me. I have very early memories of being driven through Beech Street, and it had a powerful effect on me. For me, it screamed modernity, the first pioneering signs of a new city. It was strangely comforting - the warm orange glow of the sodium light, the rhythm of the coloured panels, the streaming lights, like the Enterprise going into warp speed. It was a snapshot of a city that had passed the period of even partial coexistence with the landscape, and was now a total structure - a cityscape. It still means to me a kind of density watershed, a Change of State in the city fabric like melting or sublimation.

There's a magnificient science-fiction sense to it as well, not dissimilar to the magic beauty of the Second Street Tunnel in Los Angeles, better known as the "Blade Runner tunnel" - white-tiled and aseptic like an inverted morgue gutter, star of numerous films and now apparently struggling to find work. In Blade Runner, Second Street is a rare blaze of light, a hint perhaps that a better life awaits not in the offworld colonies, but underground, escaping the ruined climate. (The underground dystopia of THX-1138, perhaps, which George Lucas called "Electronic Labyrinth" when it was still a student short.) That sense of a controlled environment, a Rosalind Williams underground techno-fantasy, is given a nudge on a walk down Beech Street by a sudden waft of chlorine from a hidden swimming pool, like some unexplainable Machine Stops fault in the life support.

Here it was, in Britain, the future - the sort of multi-level city that has meant modernity since Metropolis and the sketches of Hugh Ferriss, in which the skyscrapers link arms and "ground level" becomes a geographer's memory, like the old rules bolted to old bridges showing the height century-old floods. It didn't seem at all bad to me, and it still doesn't. It was thrilling, and it was human - a place that we had made. And I still get that go-go-go futuristic frisson from it.
Posted by Unknown at 15:47