I Left My Heart in Ul Qoma 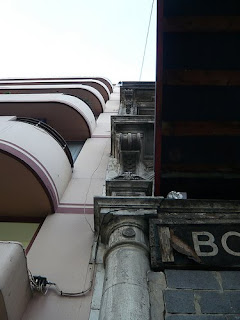 (The following is my review of China Miéville's new book The City and The City. The text appears in Icon 075 (September 2009, published in August). Since it won't be online for a while, and the issue is off sale, I thought I'd repost it here by way of recommending the book.)

Beszel, the imaginary metropolis that is the setting for China Miéville’s latest book, is much like many cities. Clinging to the edge of Europe, it has crime and traffic, and is grappling with the problems of globalisation. Its inhabitants talk about Google and Starbucks. But it is also extraordinary – in fact, it is one of the most fascinating literary creations of the new century so far.

The City & The City explores Beszel through the eyes of inspector Tyador Borlú of the Extreme Crime Squad, who is investigating the murder of a young foreign woman. It’s an investigation that becomes ensnared in Beszel’s unique geopolitical situation: it is not one city but two, or rather it shares its space with another polity, Ul Qoma. The two cities overlap and interweave, but so sensitive and contentious is their Balkan history that the citizens of one cannot see the other. It is not literally invisible, but the inhabitants of the dual city are practised in “unseeing”, conscious ignorance, a skill like the doublethink in George Orwell’s 1984. To engage the other city which shares their streets, even by accident, is to invite terrifying consequences.

This sounds like fantasy, and in a sense it is. Miéville has written fantasy before, creating the superb gothic supercity New Crobuzon for the 2000 novel Perdido Street Station and its sequels. But really the world of The City & The City is rarely much more fantastic than the real world around us. Real-life analogues to Beszel’s many complications continually occur. There is, of course, of the surrealism of existing and historical divided cities: the tangle of Jerusalem’s temples and tunnels, where archaeology is politics, and the Cold War tragicomedy of West Berlin.

And Beszel/Ul Qoma is not just those cities: every city is more than one city. Every day we instinctively unsee the cities that share our space – we unsee poverty, crime, the other. On the day this review was written, the killers of a 16-year-old Londoner were convicted, and the morning papers were explaining the complicated turf war between the Shine My Nine and Don’t Say Nothing gangs. These political alignments and the ground they contest are unknown to most of the inhabitants of the city, but mean life and death to others. A fascinating but depressing report released by the Joseph Rowntree Foundation last year explored this territoriality. It included maps drawn by teenagers that revealed their neighbourhoods as patchworks of “safe” and “no-go” areas, an exquisitely complex secret topography.

This is why The City & The City succeeds so beautifully. All cities have their arcane, unspoken, “other” side. Noir works by exploring that other side – stories in the genre start with a set of circumstances that do not make sense in the “conventional” world alone, and can only be understood by venturing into the underworld, the secret city, the parallel universe of criminality. Miéville seems to have an instinctive understanding of this, and he weaves city and mystery together to tell a gripping story.

I think this book could be a clever mystery story. I really like this kind of book. After this, I will right away go to my favorite book store to buy this book. Thank you for giving me this reference.

Yeah, that’s right! I agree with you. In my opinion, this book is very interesting and very nice to read. This book contains a mystery that will make us more curious about story on this book. This book would be very successful in the market. I would definitely buy this book. Thank you for giving me a reference about this book.