A Zone of One's Own 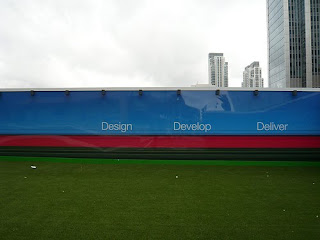 My review of Anna Minton's book Ground Control is at long last up on Iconeye.com. But the delay* hasn't made it any less timely - I fear its subject matter is only going to become more and more relevant. It cover the sorry (and under-examined) story of what has happened to Britain's cities under the fluttering banner of Regeneration - a selloff of public space, the erosion of ancient civic rights, the self-destruction of local democracy, the rise of gated communities, and the astonishing extension of police powers into every aspect of the lives of people who have mostly done nothing more than make other people feel uneasy. It's sickening stuff, and Minton has done a good job of bringing it all together in one book.

What Minton makes clear - although she is never wholly explicit about it - is that the decline of urban liberty is a largely spatial phenomenon. Control over the city by the authorities - increasingly private authorities - is arranged by carving the territory into zones and policing individual access to those zones. As I say in the review, things like ASBOs and dispersal orders are spatial in effect. "Order" in the city is being enforced by depriving certain groups and individuals of access to certain areas. 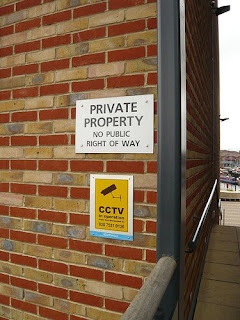 Zones are going to be a very important part of the future. Their use has cropped up in a number of books I've read recently: Keller Easterling's Enduring Innocence, Mike Davis' Evil Paradises, and The Invisible Committee's infamous The Coming Insurrection. (These are all heartily recommended reading.) This is what The Coming Insurrection has to say on the subject:

The unmanned drone that flew over Seine-Saint-Denis last July 14th - as the police later confirmed - presents a much more vivid image of the future than all the fuzzy humanistic projections. That they were careful to assure us that the drone was unarmed gives us a clear indication of the road we're headed down. Territory will be partitioned into ever more restricted zones. ...

I don't agree with what's advocated in The Coming Insurrection, but as an analysis of the present situation, it's often extremely insightful. A future of privately owned city centres and gated communities is no future at all. This extraordinary story from the United States (via) is a sample of why privatised, gated estates don't deserve the name "community".

*The book has been out for a few months; my review was originally slated for Icon 076 but became snarled in a scheduling problem, and held for 077, when it finally had the ignominy of being bumped to make way for Mr Philippe Starck's Design For Life.

Interesting article, and one that got me thinking: