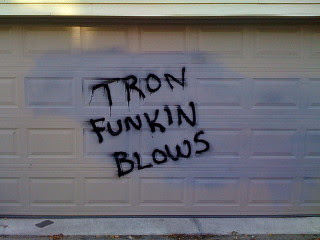 Image taken from the Flickr stream of Cliph and used under a Creative Commons Licence.

"Reality as we know it is finished," I announce rather grandiosely in this piece from Icon 076. It takes a fairly fleeting look at the rise of "augmented reality", a term used to describe a number of linked technologies that are making it possible to overlay data and graphics on the world around us (via our next-generation phones, until appropriate eyewear becomes available).

This relates to an older piece I wrote about the film Tron. I wrote:

[Tron] gave computers an inner life rich with stories, drama, conflict and even emotion. It made the abstract seem real. But it also touched upon how virtual reality could improve on the real thing – that it was an environment unbounded by limitations such as the laws of physics, where everything could be manipulated and altered. The young people it inspired became the young professionals who designed and built the internet and drove the world-changing high-tech boom of the 1990s.

In other words, films like Tron have a lot to answer for. This came up again in a conversation I had recently with Matt Jones of BERG. Children see these worlds, and the men and women they become try to build them. This might not even be on a concious level - just that children who loved, say, Flight of the Navigator or Short Circuit would absorb a certain view of what constitutes high technology and then go on to try to make it happen, building BMW's GINA concept car and the Pentagon's attack robots respectively. Which just goes to show the incredible power of fantasy, particularly fantasy of a speculative nature.

This isn't to say something po-faced and brainless like "speculative writers have great responsibility". It might be a little frightening to think that the designers of the aforementioned killer robots are getting their ideas from Terminator, but it's more frightening to imagine a world where killer robots were being developed, but we didn't have Terminator as a guide to what could go wrong. The people in that world wouldn't be frightened enough.

Returning to augmented reality, there is of course a great risk that it will flop, just as the first wave of virtual reality did in the 1990s. I remember being taken to the Trocadero Centre to try out the "Virtuality" machines installed there - the first in the UK. I remember it clearly because it was such a huge disappointment. AR strikes me as massively more practical, but no matter how sophisticated the technology, it still comes up against a fixed limitation - the human arm. Are people going to walk around holding up their mobile phones to navigate the world?

Rationally, I'd say no, but then I wouldn't have guessed that people would experience real-life events through the tiny screen on their digital cameras or even their mobile phones - and they do, preferring to see an even through a technological surrogate. I wouldn't have guessed that people would trust the information on their Sat Nav screen over the evidence of their own eyes and instincts, but they do. There's no guessing what people might prefer to delegate to gadgetry.
Posted by Unknown at 04:20

Will, I really liked this post and composed a reply that was so long that it turned into a post of its own: We can imagine it for you wholesale

Hello, I just discovered your blog through BLDGBLOG's recent posting. It's a tremendously stimulating read. I though you might be interested in this recent talk by Slavoj Zizek, which has some really interesting insights into the consequences of AR technology. Here's a link to the recording.