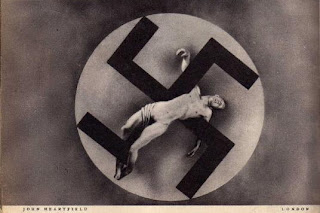 Part of an anti-fascist photomontage by John Heartfield, via this Flickr feed.
Controversy is a strange thing. Unlike rage or disgust, you can't feel controversy – it's not an emotional response to a work of art. It is, at best, an abstract, group phenomenon, a manifestation of the hive mind, something that you can take part in somehow (details are hazy). At worst – and I think this is the case nine-tenths of the time – it is entirely contrived, imagined, a Jabberwocky invented by yellow press that can pursue targets that aren't actually causing any rage, disgust or hurt feelings. Controversy is a red herring – either the problem is something else (the thing in question is revolting, hurtful, dangerous or whatever) or there is no problem.

Over Christmas and the New Year I read a controversial book – Jonathan Littell's The Kindly Ones, a fictional memoir of an SS officer closely involved in the Holocaust. An attempt to get inside the head of a Nazi genocidaire, The Kindly Ones was feted in France and condemned in Germany and by the influential Michiko Kakutani in the USA. A delightful miasma of ill-repute surrounded the book when I picked it up in the spring of 2009 - I then proceeded to ignore it on a shelf for some months, intimidated by its length - more than a thousand pages of closely printed hardback.

It took about a month to read - far more time than I'd normally have to devote to a book - but the effort was worth it. It's superb, and I think it's a fairly safe bet that its reputation will grow in the coming decades. Much of its content is revolting: the protagonist, Maximilien Aue, is personally involved in mass-killing of Jews in occupied Russia, and later in the mechanised slaughter of the extermination camps in Poland. He's also a sexual and moral degenerate, possessed by incestuous desire for his sister and sexual hatred of his Mother. It's not easy to like him, but spend enough time in any character's company and (if they're well written) you will at least begin to understand their patterns of thought and the how they see the world.

And Aue is superbly written. The book has its off-passages, where it drags, but at its best it is magnificent. Aue is not a front-line soldier - he is in the rearguard, theoretically charged with military security but in fact among those responsible for exterminating large chunks of the civilian population of the Soviet Union (mostly the Jews). The opening third of the book, 1941-1942, cover the helter-skelter early successes of operation Barbarossa, and for Aue the pestilent absurdities of turning the mystic hatred of a handful of daydreaming bigots into actual "actions". Much turns on the practical question of how to kill very large numbers of people efficiently: and with minimum human cost to the killers. (That's the Nazi state all over - institutional mass violence coupled with soppy-stern nannying.)

In the Caucasus, where the Wehrmacht's advance finally runs out of steam, Aue become involved in steadily more crazy hair-splitting over the questions of which nationalities should be exterminated and which should be considered potential allies – an attempt to fine-tune racial boundaries that is totally in the realm of pseudoscience, given that the whole notion of distinct races is doubtful. One character is able to voice this view at one point – in context, the moment is utterly shocking, as the story is told from the point of view of a man whose entire job is identifying and “dealing with” racial differences. Although Aue is insane – possibly at the start of the book and certainly by the end of it – he's also lucid, and makes his case. Of course he can't come close to justifying the business to the readers, but instead he stirs up clouds of relativism (at the time Aue is writing his memoir, the Vietnam war is being fought, giving opportunities for a lot of “are we really so different” talk) and attempts to show the logic of the actions where it exists. He doesn't harbour any particular hatred of the Jews; instead, for him, the “problem” is all logistics and linguistics – and efficiency, as he is at the perversely humane end of the spectrum of Holocaust engineers: if such a group is subhuman, better to use them as slaves than to waste resources snuffing them out, no? Senseless killing bothers him because it is senseless, not because it is killing. 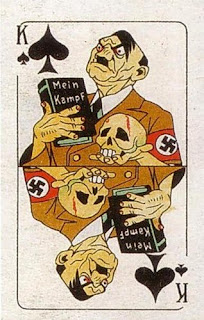 Anti-fascist playing card, via this site and the Bibliodyssey Twitter feed.
With its involved (pseudo-)academic debates and bitchy rivalries, for a surreal moment The Kindly Ones feels like a campus novel, with the occasional interlude of ultraviolence (a rhythm that reminds one of American Psycho). This moment is cut short when Aue is sent to Stalingrad.

The Stalingrad sequence is astonishing - an awe-inspiring symphony of human misery, pain and violence that I think propels Littell's book from the merely good to the great. When Aue arrives, the German armies besieging the city have already been encircled, in turn, by Soviet armies. Inside the encirclement, the “kessel” (cauldron), conditions are beyond terrible. The imagery of Aue's arrival in the kessel is haunting – it is snowbound; an ominous mountain of wreckage overlooks the airfield, which is under constant artillery fire; a cluster of radio trucks; a line of railway carriages, buried in snow, serving as a field office. The railway goes nowhere – the airfield and the radio trucks are the only link with “civilisation”. Indeed, the airfield – and Goering's vain promise that the trapped armies could be supplied by air – is the only reason the kessel does not collapse immediately. The promise is that 1940s high-tech (in the form of radio and Junker aircraft) can redeem the situation – but it is doing is prolonging the agony. Many of Aue's (savage and strange) experiences in the city take place in the structures of modernity: theatre, factory, department store.Although it's not written as such, the Stalingrad sequence of The Kindly Ones feels like a mockery of the whole idea of technological civilisation. Having read Antony Beevor's superb book about Stalingrad, I was interested to see exactly how Littell could do justice to the real story of the battle there – but he succeeds, superbly.

There's much else - Stalingrad doesn't even take the book to the half-way point - but this isn't a review or a summary, more a sweeping together of loose ends of thought. Back to the matter of controversy. It's now 65 years since the defeat of Nazism. There is a desire, an understandable desire, to screen off the Nazis from the imagination - to keep them in the realms of heartless supervillains or comic butts of jokes, rather than flesh them out as human beings. It is somehow feared that a book like The Kindly Ones, and a character like Aue, makes Nazism thinkable again. Aue, for all his insanity and despicable traits, says "hey, see things my way", and if we read to the end, we've given him a hearing. And some believe that they shouldn't be given that hearing at all.

It doesn't matter if this is a reasonable position or not - given time, the special cultural status of the Nazis is going to crumble. We're fortunate that the first fruits of this cultural thaw are extremely high quality: The Kindly Ones and Downfall are superb. The "angry Hitler" remixes on Youtube are a sign that the dam is bursting, but luckily standards have been set quite high.
Posted by Unknown at 15:31

I hope your conclusion is correct, but unfortunately, since our society -- like the German post WWI society -- reacts to upsets and frustrations (let alone insanely horrifying death and destruction of WWI, and, to a lesser extent, the mass murder of September 11, 2001) by looking to fix blame, pointing angry fingers, picking up guns and tying noose-knows, I don't think it is.

In our present situation, the existence of a band of total looneys like The Family (examined in Jeff Sharlet's excellent book by that name, and also explained in Max Blumenthal's Republican Gomorrah), whose members number so many in USA House and Senate who believe they're following Jesus' secret message, i.e., that those who are rich and powerful and elected are in that position because god wants them to be, that they owe their reality to Jesus and not to anyone else (including voters) that wanting Health Care is blasphemy because it's saying you don't believe god can heal you, that having as union is outright communistic satanism, I'm not expecting to see rational social dynamics.

We can look at current phenomena like the tv series 24 the continuing success of the sociopathic Grand Theft Auto video games (where the person is a participant and not just a passive entertainee) and it certainly seems as if we're achieving incredibly monstrous over-fulfillment of Robert de Ropp's grim observation set forth in his 1972 book The Master Game, that (even then) "Most of our entertainments are pathological."

I think the only thing saving us from the Nazi-esque society is that in the USA the economic situation has not yet achieved critical mass. And we can hope the hostility and hatred continues to be so fragmented and diverse, every group against all others, i.e., absolutely no sense of ourselves as a single society, it's unlikely we'll see any monolithic agreement at whom to direct our (existing) psychopathic rage and pick one or more groups to murder. The flood of homicidal solutions may be only temporarily dammed by the fact that there isn't any one group that is more than a minority. Except possibly for a political unification of the Brave New World-esque moronic chanters of "USA! USA! USA!" (We're deltas and we're the best.)
There is a 2-volume book by one Klaus Theweleit (with a preface by Barbara Ehrenreich) titled Male Fantasies, culled from the personal diaries of the Freikorps (the WWI officers' corp that refused to disband and ultimately formed the core of the SA) - published 1987 and 1989 by the University of Minnesota. It gives a virtual mirror of the dynamics and reality fantasies of current American society.

Another work that gives serious insight to our dynamic is Ian Kershaw's 2-volume biography Adolph Hitler. He is not a biographer by trade, but a professor of history, an historian specializing in early 20th century Germany (Weimar Republic), and as such, his biographical writings deal with context, i.e., what was going on in Germany that allowed this corporal to rise to power (his conclusion -- Hitler didn't create the Third Reich -- it happened and his manipulations of people allowed him to ride it like a horse).

I would hope I'm wrong and you're right, but let me know what you think after you read the books I've mentioned here.