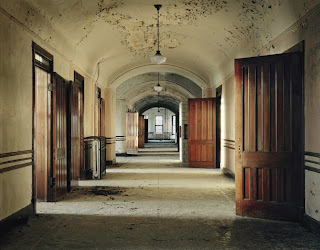 Ruins are seemingly inescapable nowadays - here I am reviewing a beautiful book of photographs of America's decaying mental hospitals. Here, and here, are the details of the book itself.

I was given a pleasingly generous word limit for the piece, which of course I used to the full, and I'm not surprised that an unlucky sub has had to cut it quite a bit. That's all for the best, but here's a paragraph from the original with some interesting details:

These hospitals were built at an extraordinary pace from the middle of the 19th century until into the 20th century. At the time, alternative treatment for mental illness was non-existent – madness was a route to destitution, imprisonment and early death. Reformers campaigned for the construction of homes for the mentally ill, and American states – frothing with prosperity and neophyte civic pride – competed to build them bigger and better. The clamour, crowds, pollution and disorder of urban life were thought to contribute to insanity, so the new hospitals were built outside towns and cities on open land. The designs were utopian – they included gardens for rest and pleasure, and agricultural land so that the patients could work. Many hospitals were self-sufficient. The buildings were, for the time, high-tech, with central heating and gaslight – in period photographs, they could be mistaken for resort hotels. Hospitals were, after the 1850s, generally laid out according the “Kirkbride” plan, with a central block for administration and staff quarters, from which stretched two long wings, one for each sex. Self-sufficient, highly centralised and controlled, removed from the depredations of industrial civilisation and minutely organised according to sex, class and condition, the Kirkbride hospitals were 19th-century pocket utopias.

(Some very repetitive writing there, and the rhythm isn't great. Drat.)

There were two striking elements to this part of the story for me: first, that cities and urban life were thought to cause or exacerbate madness, and second the conscious utopianism of asylum design. The anti-urban taint to the philosphy behind the hospitals is interesting. And as the asylums are total environments – in contrast to other 19th-century institutional buildings, such as prisons, schools and workhouses, they provide for every aspect and stage of a person's life – there is unparalleled scope for turning them into little models of a perfect world, a “pocket utopia”. With that in mind, it's possible to see in greater detail their appeal to 19th-century social reformers. 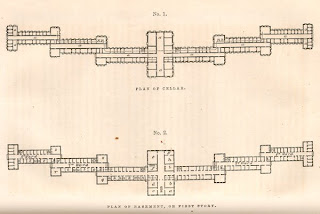 A hospital on the Kirkbride plan.
Those two strands, then, connect in my mind these giant asylums with the Garden City Movement. There's that same hygienic concern with separating people from the malign influence of the big bad city and reconnecting them with the healing powers of the rural landscape. And there's also that stifling clerkish utopianism: the winged Kirkbride plans of mental hospitals have the same organisational impulse in them as Ebenezer Howard's compass-drawn plans for garden conurbations, orderly orbiting planets in a universe set right. 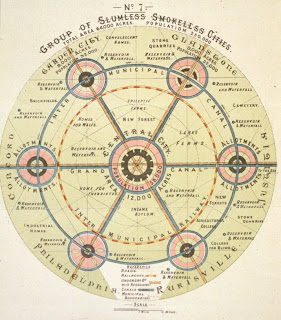 Ebenezer Howard's Garden City concept.
In between the suburb-planets of Howard's garden cosmos, what do we see? Insane asylums, homes for waifs, epileptic farms, homes for inebriates. The social debris of the 19th century, and the casualties of industrial society, being looked after – but also out of the way. It's a mistake to write off these reforming instincts as pure anti-urban prejudice, as the 19th-century city was undoubtedly an unhealthy place to live. But the 19th-century concern was social contagion as much as poor housing or air pollution. Mentally ill people were seen as a potentially destabilising force while in the cities – their removal was for the health of society as much as for their own good. The Garden City is the world run as a Victorian hospital.
Posted by Unknown at 02:05