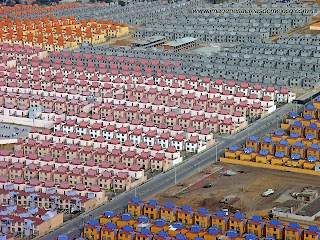 Houses in Ixtapaluca, Mexico. Image taken from the Flickr photostream of jmb1977 and used under a CC Licence.

[These are two stories written for the Ballardian/Savoy Books microfiction competition, the results of which have now been announced. Stories written for the contest had to explore Ballardian or Savoyard themes. "Live-Work" got an honourable mention. The second story, "Unruins", was inspired by the above image, first seen on this Things post some months ago. It's now the basis of a longer, more elaborate project, to be announced at a later date.]

Live-Work
“After the crash, all the money went out of urban renewal,” said the property developer, Maxinalon. “This warehouse conversion was slumming itself anyway, so ...”

He had moved in the dealers and the people-traffickers. The live-work units were now meth labs, and the niche coffee outlet was a burned-out husk. The redundant creatives had adapted marvellously, because the hours were flexible.

To the sound of the exhausted police beating down the period-feature, iron-braced doors (wires trailed from the smashed entryphone), Maxinalon smiled a smile that was all percentages. “We’ve exhausted the potential of regeneration; the future is obviously degeneration.”

Unruins
The machines were still moving somewhere on the surface of the mutilated planet. They still extruded the epoxycrete frames of suburban houses, open at both ends, windows gaping. In some places, the land was eight deep in rapid-rendered family homes, jumbled in the upper levels as walls intersected with pitched roofs and the detritus of civilisation. Pictures from the ocean floor were discouraging. The hunting party had found a pocket of stale air in a second level subdivision. A car radio was embedded in the wall, and snarled the signals of new lifeforms emerging in the unruins.
Posted by Unknown at 03:02

Both of the stories are great. But I like the second story, Unruins. The language used in this short story is very interesting. The parable can be easily understood.